Jamdani saree, pride of Bangladesh, fetches around Tk 100 crore from export annually. This traditional item is mainly weaved in Narayanganj and its adjacent areas. There are families of weavers who keep alive the sophisticated product for generations.

Most of the Jamdani Sarees are exported to different counties including India, especially to Kolkata, where there is a large market among the Bengali women.

From ancient times, Jamdani saree has been revered in Bengal for its intricate designs and painstaking attention to details. Women of all ages love wearing Jamdani sarees and the demand for the sarees are high all around the year. According to historical texts, Jamdani sarees were being made in Narayanganj even before the dawn of the capital Dhaka. Jamdani saree is well known to Bengali women as the successor to the fine muslin cloth of ancient times. Jamdani cloth is made by weaving designs on muslin cloth.

Jamdani was produced for centuries in South Rupshi of Narayanganj district in Bangladesh. The historic production of Jamdani was patronized by the courts of Mughal emperors. The fall of the Mughal Empire in India deprived the producers of Jamdani of their most influential patrons. During British colonial era, the Bengali Jamdani and muslin industries rapidly declined due to the colonial import policies which emphasized industrially produced textiles.

In recent years, the production of Jamdani has undergone a revival due to rising interest in the fabric. In 2013, the traditional art of weaving Jamdani was declared a UNESCO Intangible Cultural Heritage of Humanity. In 2016, Bangladesh received geographical indication (GI) status for Jamdani Sari. It was the first GI status given to any Bangladeshi product.

Currently, Jamdani saree prices range from Tk 2000 to Tk 30,000. However, for special orders such as bridal sarees, the price can go up to a lakh or more.

In present times, Jamdani means sarees but previously designed scarves, turbans, tunics and curtains were also made from the cloth. A five-week Jamdani festival, titled 'Construction of Traditions’ was launched on Friday in the capital at the Bengal Shilpalay, as a joint venture by the Bangladesh National Craft Council and the Bengal Foundation, as an ode to the golden era.

Bengal Foundation Director General Luva Nahid Chowdhury gave the welcome address at the program. She said that we must highlight our heritage and culture in order to bring Bangladesh to the global spotlight. Jamdani craftsmen still carry on this rich tradition. She added that the Jamdani festival aims to highlight our past among the youth of the country. 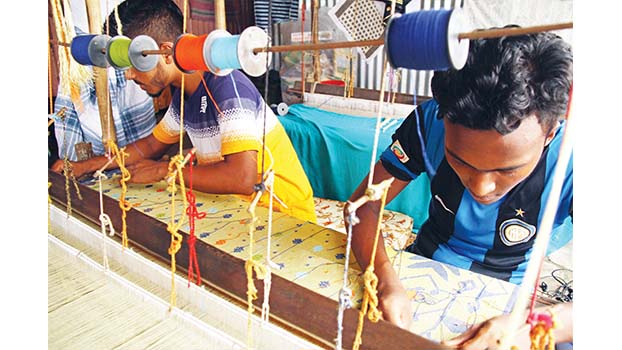 In her speech, Dr Ghada Hijjawi-Qaddumi said that Bangladesh Jamdani trade is exemplary for the whole world. Jamdani sarees should be honoured as a part of the world heritage. She also said that every person in Bangladesh has a role to play in saving this industry. She requested the authorities to organize Jamdani Festival every year. Dr Selina Hayat Ivy said that she is proud to be a resident of this artistic city. She said that the Jamdani craft should be properly presented to the rest of the world. She also requested the government of Bangladesh to provide assistance to the Jamdani industry and its artisans.

Speaking to the chief guest, Minister of Education Dr Dipu Moni said, “Jamdani speaks of our rich history. When we talk about Jamdani, the history of the river Shitalakshya and Meghna comes up. We must save the Jamdani industry from extinction, as well as the rivers. We should all come to the exhibition of these works so that we do not forget our past. The Prime Minister and I wear Jamdani sarees when we go to any event at home and abroad. If someone asks, we are very proud to say that it is our own Jamdani saree. I thank the World Craft Council for taking the initiative to give Sonargaon the status of World Craft City.” At the event, five weavers and their assistants were given the 'Craftsman Award'. The recipients were Ustad Md Sajib Hossain and his assistant Alal Hossain, Ustad Motalib and his assistant Noor Amin, Ustad Munir and his assistant Abu Bakr, Ustad Siddiq and his assistant Maksuda, Ustad Jamal and his assistant Shakil. Aarong, Kumudini, Ajanta and Tangail Sareeghar are the partners for this festival.

The festival is a wonderful initiative to pay tribute to the rich history of Jamdani. If more and more events like this are organized, the industry will benefit hugely and the exposure in media is likely to help boost sales and production.

China tells top global CEOs it will ‘further open up’

Could Facebook’s new currency be stopped in its tracks?