The pioneer of Surrealist cinema

Luis Buñuel, (born February 22, 1900, Calanda, Spain—died July 29, 1983, Mexico City, Mexico), Spanish filmmaker who was a leading figure in Surrealism, the tenets of which suffused both his life and his work. An unregenerate atheist and communist sympathizer who was preoccupied with themes of gratuitous cruelty, eroticism, and religious mania, he won early fame with avant-garde experiments in France and then pursued an obscure career in Mexican commercial cinema before earning international acclaim with his late films made in Spain and France.

Buñuel was born in Calanda, in northeastern Spain, the eldest of seven children. His father, Leonardo, made a fortune in Havana selling hardware and firearms, and he subsequently returned to Spain, married a much younger woman, and settled down to the life of a country gentleman. “The fact of the matter,” Luis later said, “is that my father did absolutely nothing.” Influenced by his mother, Buñuel studied violin and contemplated a career as a composer. He graduated from the Jesuit school in Zaragoza, where the family moved shortly after his birth, but he rejected religion and became a lifelong atheist.

Entering the University of Madrid (later Complutense University of Madrid) in 1917, Buñuel took rooms in its Residencia des Estudiantes. A hotbed of liberal thought, the Residencia attracted young men interested in art, music, literature, and politics. Buñuel befriended two rising stars, poet and playwright Federico García Lorca and painter Salvador Dalí. Fascinated with the natural world, particularly insects, Buñuel initially hoped to become an entomologist. Instead, his father insisted that he study engineering, a profession useful for a landowner and, moreover, respectable. Ultimately, however, he studied philosophy.

In 1925 Buñuel moved to Paris in order to pursue a position with the emerging League of Nations. The job fell through, but he remained in France, reviewing movies for Madrid papers while acting as an extra and production assistant on such films as ‘Carmen’ (1926; directed by Jacques Feyder), the Josephine Baker vehicle ‘La Sirène des tropiques’ (1927; Siren of the Tropics), and ‘La Chute de la maison Usher’ (1928; The Fall of the House of Usher), which he also cowrote. Friends made on those films, particularly actor Pierre Batcheff and cinematographer Albert Duverger, later became his collaborators.

Determined to make his mark, Buñuel asked his mother for a sum equal to the dowries allocated to each of his sisters. He invested it in ‘Un Chien andalou’ (1929; An Andalusian Dog), a short film in Surrealist style. Using the free-association technique pioneered by André Breton and Philippe Soupault, Buñuel and Dalí wrote the film, which Buñuel directed and Duverger photographed; Batcheff played a major role. Dalí arrived from Spain only for the last days of shooting and, according to some reports, was surprised by Buñuel’s efficient management of the production and resented the evidence that he could function without him. Their friendship subsequently cooled.

Breton approved ‘Un Chien andalou’ and admitted both Buñuel and Dalí to his tight-knit circle of Surrealists. Wealthy dilettantes Charles and Marie-Laure de Noailles funded his second film, ‘L’Age d’or’ (1930; The Golden Age), an assault on the repression of sex by organized religion. In one of its most-controversial scenes, Christ is seen leaving an orgy orchestrated by the Marquis de Sade. Before its release, MGM put both Buñuel and the film’s star, Lya Lys, under contract, shipping them to Hollywood. In their absence, right-wing protesters wrecked a cinema showing the film, the censor banned it, and the Noailleses fled Paris. Dalí also distanced himself from the film. 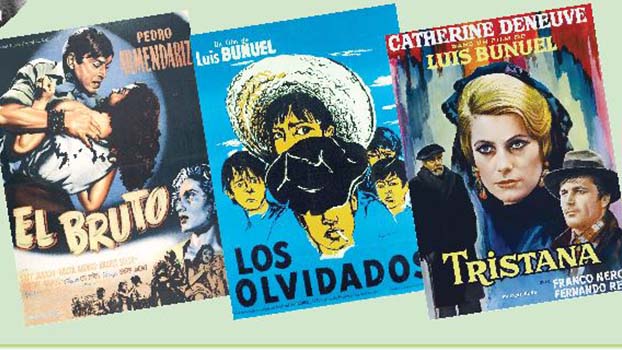 Disgusted, Buñuel considered taking a long Pacific Ocean cruise. Instead, inspired by news of a new socialist republic in Spain, he hurried back to Madrid in 1930. As the fascists, the military, and the Roman Catholic Church struggled to stifle the left, an anarchist group funded ‘Las Hurde’s (1933; Land Without Bread), his documentary about that remote impoverished region. In Madrid he also produced some low-budget commercial films in an attempt to build a local cinema industry, but the project collapsed as the country descended into the Spanish Civil War. Returning to Paris in 1936, Buñuel acted as a spy and a propagandist for the Republican government in exile until, fearing assassination by fascist agents, he fled with his wife and young son to the United States. Vowing never to return to a fascist Spain, he remained in exile until 1960.

While Buñuel struggled in New York, Dalí flourished, being feted by society and the media. When Buñuel asked him for a loan, Dalí refused, allegedly lecturing him on the virtues of thrift. After briefly working in Hollywood, dubbing feature films into Spanish, Buñuel was rescued by Iris Barry, the film curator at New York’s Museum of Modern Art. She employed him to revoice documentaries for the South American market and edit captured Nazi films into propaganda. But his political past soon became an embarrassment, and he was forced to resign.

In 1946, like many left-wing blacklistees, Buñuel relocated in Mexico, becoming a citizen in 1949. Paradoxically, the move launched his feature career. Producer Oscar Dancigers, a clandestine communist, hired him to direct inexpensive comedies and musicals. Buñuel planned them with such precision that they stayed within even Dancigers’s meagre budgets. After ‘El gran calavera’ (1949; The Great Madcap), a success for comic Fernando Soler, Buñuel made ‘Los olvidados’ (1950; The Young and the Damned), a drama of violence among slum youths in Mexico City to which Buñuel added a subversive surrealist subtext, including a dream sequence redolent of incest. Regarded by some Mexicans as an insult, Los olvidados might have been suppressed had the 1951 Cannes film festival not selected it and awarded Buñuel the best director prize, after which the film screened for months in Paris and London.

Despite offers to work in Europe, Buñuel continued to live quietly and frugally with his family in Mexico City. Always delivering his films on time and under budget, he enjoyed a rare freedom to air his communist, atheist, and surrealist principles and to explore his sexual obsessions. His best Mexican films included ‘Ensayo de un crimen’ (1955; The Criminal Life of Archibaldo de la Cruz), in which a man fetishizes the wax dummy of a woman, and Nazarín (1958), about a priest vainly attempting to live simply, in imitation of Christ.

Buñuel also made subversive film versions of Robinson Crusoe in 1954, with Irish actor Dan O’Herlihy, and of Wuthering Heights in 1953 (original title Abismos de pasión). El ángel exterminador (1962; The Exterminating Angel) spun a fable about guests at a dinner party who find themselves powerless to depart and take up residence in the mansion of their hosts. The 42-minute Simón del desierto (1965; Simon of the Desert) attacked Christian dogma, showing all the temptations of the flesh assailing St. Simeon Stylites, who fled to the wilderness and sequestered himself on top of a column.

In 1960 Buñuel returned to Europe for the Cannes screening of The Young One, a racially provocative drama set on an offshore island and starring Hollywood left-wing actor Zachary Scott. Wooed by young Spanish directors and by the Francisco Franco government, he scandalized his supporters by reneging on his pledge never to work in fascist Spain, agreeing to make a feature there.

By choosing to adapt Halma—a novel by the respected author of Nazarín, Benito Pérez Galdós, about a saintly woman trying to establish a community for the poor—Buñuel convinced the authorities of his good intentions. In practice, his version, retitled Viridiana, discarded most of Galdós’s work, substituting the story of the pious Viridiana who visits her wealthy uncle and guardian before entering a convent. When she resists his attempts at seduction, he hangs himself with her childhood skipping rope, its suggestively phallic wooden handles prominently displayed. In the film’s famous banquet scene, the mob of derelicts that Viridiana has subsequently tried to help freezes in a tableau precisely replicating Leonardo da Vinci’s Last Supper while, to the “Hallelujah Chorus” from George Frideric Handel’s Messiah, a crone “photographs” the diners by lifting her skirt to expose herself. The Franco regime rushed to suppress the film, but in a stratagem of surrealist eccentricity, Buñuel’s son had already smuggled the negative into France hidden in a van carrying a team of bullfighters.

After Viridiana won the Palme d’Or at Cannes, Buñuel alternated between Paris and Mexico City. In France he adapted Octave ‘Mirbeau’s Journal d’une femme de chambre’ (1964; The Diary of a Chambermaid), exposing the French bourgeoisie as closet fetishists, and he attacked sexual repression in ‘Belle de jour’ (1967; “Beauty of the Day”), adapting Joseph Kessel’s novel of a middle-class woman who finds guilty pleasure in working afternoons as a prostitute. Catherine Deneuve’s performance in the lead role was widely acclaimed.

His later French films—including ‘Tristana’ (1970), again starring Deneuve; ‘Le Charme discret de la bourgeoisie’ (1973; The Discreet Charm of the Bourgeoisie); and ‘Cet obscur objet du désir’ (1977; That Obscure Object of Desire)—all trade in Buñuel’s first and only real belief system, surrealism. In this world, society rests precariously on a swamp of repression and suppressed violence from which, periodically, dreams erupt, goading superficially civilized people into actes gratuits during which they cast aside the facade of propriety to fornicate and kill. As Buñuel whiled away his afternoons in one of many favourite bars, sipping his signature sweet martini cocktail, the Buñueloni, he found quiet satisfaction in watching society at last catch up with what he had been saying all his life.

Buñuel’s autobiography—My Last Sigh, ghosted by longtime collaborator Jean-Claude Carriere—was published in 1983, the year of his death, but he remained intensely private to the end, committed only to his work. “I hate publicity,” Buñuel said in 1960. “It makes the good things, the human things, disappear. I care only what my friends think. And money? If I made too much, I might stop working.” Of Buñuel’s often contradictory personal philosophy, Orson Welles remarked aptly, “He is a deeply Christian man, and he hates God as only a Christian can.”

The most controversial of filmmakers and the most reticent, Buñuel, almost uniquely among directors of his generation, pursued his vision in the face of commercial realities. Indifferent to profit, shunning possessions, he concerned himself solely with the act of creation. A surrealist to the last, his fidelity was to the unconscious and those impulses to which it gives rise. A creator sui generis, he was rivaled only by the Marquis de Sade in his unflinching regard of the seductive evil at the soul’s core.

It’s time for BNP to say goodbye to politics: Quader