Vittorio De Sica was an Italian director and actor, a leading figure in the neorealist movement. Born into poverty in Sora, Lazio (1901), in a Roman Catholic family, he began his career as a theatre actor in the early 1920s and joined Tatiana Pavlova's theatre company in 1923.

His passion for gambling was well known. Because of it, he often lost large sums of money and accepted work that might not otherwise have interested him. He never kept his gambling a secret from anyone; in fact, he projected it on characters in his own movies, like ‘Count Max’ (which he acted in but did not direct) and ‘The Gold of Naples’, as well as in General Della Rovere, a film directed by Rossellini in which De Sica played the title role.

In 1933 he founded his own company with actress Giuditta Rissone and Sergio Tofano. The company performed mostly light comedies, but they also staged plays by Beaumarchais and worked with famous directors like Luchino Visconti.

In 1937 Vittorio De Sica and Giuditta Rissone got married. Rissone gave birth to their daughter, Emi. In 1942, on the set of ‘Un garibaldino al convento’, he met Spanish actress Maria Mercader (sister of Ramon Mercader, Leon Trotsky's assassin), with whom he started a relationship. After divorcing Rissone in France in 1954, he married Mercader in 1959 in Mexico, but this union was not considered valid under Italian law. In 1968 he obtained French citizenship and married Mercader in Paris. Meanwhile, he had already had two sons with her: Manuel, in 1949, a musician, and Christian, in 1951, who would follow his father's path as an actor and director. 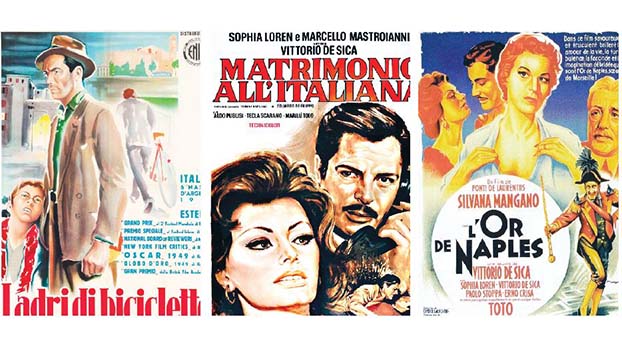 Although divorced, De Sica never parted from his first family. He led a double family life, with double celebrations on holidays. It is said that, at Christmas and on New Year's Eve, he used to put back the clocks by two hours in Mercader's house so that he could make a toast at midnight with both families. His first wife agreed to keep up the facade of a marriage so as not to leave her daughter without a father.

During a prolific career that spanned 55 years, De Sica directed 35 films and acted in more than 150. His career as an actor began in 1918 with a small part in a silent film. Throughout the 1920s he performed in films and musical theatre and with touring theatre companies before attaining stardom in Italy with his role in ‘Mario Camerini’s Gli uomini’, ‘che mascalzoni!’ (1932; “What Rascals Men Are!”). De Sica’s subsequent roles throughout the 1930s established him as a romantic leading man who was especially deft at light comedy; many critics have compared his screen persona to that of Cary Grant.

Although he maintained a successful acting career until the end of his life, De Sica’s directorial efforts—usually in collaboration with screenwriter Cesare Zavattini—are regarded as his more influential contribution to cinema history. The roots of Neorealism—an emphasis upon simple, honest story lines, a documentary style, the frequent use of children as protagonists, on-location shooting, social themes, and faith in the brotherhood of man—are found in De Sica’s early works, particularly ‘Teresa Venerdì’ (1941; Doctor Beware) and ‘I bambini ci guardano’ (1942; The Children Are Watching Us). It was during the postwar peak of Neorealism, however, that De Sica became one of the world’s most acclaimed directors with four masterpieces of the genre: ‘Sciuscià’ (1946; Shoeshine), an account of the tragic lives of two children during the American occupation of Italy; ‘Ladri di biciclette’ (1948; The Bicycle Thief), an Oscar winner for best foreign film; ‘Miracolo a Milano’ (1951; Miracle in Milan), a comic parable about the clash of rich and poor in Milan; and ‘Umberto D’ (1952), a tragedy about a lonely pensioner, his dog, and a young maid who takes pity upon them both. The performances of the largely amateur casts in these films received widespread acclaim. As he was a skilled actor himself, De Sica worked well with nonprofessionals, especially small children, from whom he was able to elicit masterful performances.

Though critical favourites, the films of the Italian Neorealist movement never attained popular acceptance. De Sica’s foray into more commercial fare was largely motivated by a reliance on his acting income and on loans from friends to finance his films. His rapprochement with Hollywood began with ‘Stazioni Termini’ (1953; Indiscretion of an American Wife), a David O. Selznick production that starred Montgomery Clift and Jennifer Jones and boasted a screenplay coauthored by Zavattini, Ben Hecht, and Truman Capote. Many of the other films De Sica directed during this period star Sophia Loren, the Italian beauty who rose to fame largely on the strength of her performances in such De Sica films as ‘L’oro di Napoli’ (1954; The Gold of Naples), ‘La ciociara’ (1961; Two Women), ‘Ieri, oggi, domani’ (1963; Yesterday, Today and Tomorrow), and ‘Matrimonio all’italiana’ (1964; Marriage, Italian Style).

By this point in his career, De Sica had reached the pinnacle of his commercial success and was known as an international director capable of working in both Hollywood and Rome. In addition, he continued to be a successful actor and essayed many of his more noted performances during this period, including his Oscar-nominated performance in ‘A Farewell to Arms’ (1957) and his memorable portrayal of a petty thief-turned-spy in Roberto Rossellini’s ‘Il Generale Della Rovere’ (1959; General Della Rovere).

De Sica’s later works combine the style of his Neorealist classics with techniques he learned during his Hollywood years. ‘Il giardino dei Finzi-Contini’ (1970; The Garden of the Finzi-Continis), winner of an Oscar for best foreign film, was an extremely successful adaptation of Giorgio Bassani’s classic novel about the destruction of the Jews in the city of Ferrara during the Holocaust. ‘Una breve vacanza’ (1973; A Brief Vacation), the simple tale of a hospital volunteer worker, was in the style of De Sica’s Neorealist films. De Sica’s last film, ‘Il viaggio’ (1974; The Voyage), was an adaptation of a short story by Luigi Pirandello that paired Richard Burton with De Sica’s favourite actress, Sophia Loren.

Vittorio De Sica died at 73 after a surgery due to lung cancer at the Neuilly-sur-Seine hospital in Paris.

Adele is obsessed with her sports agent beau Rich Paul!

Sidharth opens up on wedding plans with Kiara