In this global world, never ending problems seem to be engulfing our dear earth, making this beautiful place vulnerable to stay in. No matter how enriched and enhanced the technology has made us, current world issues are pulling us to sit back and think what will the next generation do? How are they going to survive this competitive atmosphere?

The participants, known as delegates, are placed in committees which are actually the specialized agencies of United Nations, e.g. WHO, UNESCO, UNHRC, etc. and countries are assigned to them which they represent as their homeland for that particular session.

Firstly, the delegates conduct research on the issue they have been given as the topic, and then they debate with the fellow delegates in the committee to establish his/her standpoint of the topic in accordance to the position of the country assigned to individuals, and finally develop a resolution for that particular issue being discussed.

All around the globe, many countries devise MUNs not only at the national level, but also internationally. Delegates around the globe come over, participate and resolve current issues, allowing a diverse exchange of ideas, enabling globalization and multilateral diplomacy. 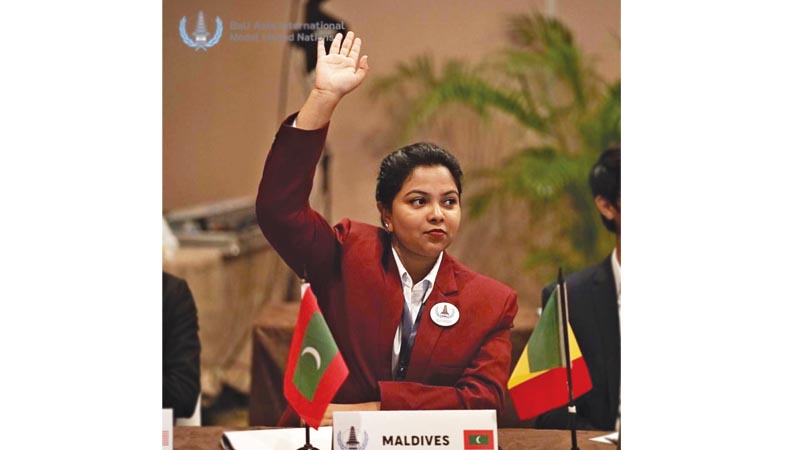 I was blessed and lucky enough to attend one such international MUN held in Bali, Indonesia, from 22 March to 25 th March. This was one of the most beautiful times of my life; discovering places, meeting new people, exchanging ideas, exploring new culture, and most importantly, developing myself and my skills of diplomacy and public speaking. Bali Asia International Model United Nations has encouraged me to challenge myself to face and embrace the fears that held me back.

Being a delegate of Maldives in the committee of World Health Organization, we talked on the issue of how to achieve Universal Health Coverage, emphasizing the third world countries. Different opinions, different ideas, rounds of debate, enabled me to realize the seriousness of the problem that the world is facing, without even realizing that we are facing such phenomena every day; we sat there brainstorming for the people who are victims , underprivileged ,looking for a miracle for a better life.

We negotiated, debated, proposed solutions that would come in help to not only those people, but also for a better tomorrow for us. Being an agent of change, the world is in our hands today; not every day everyone gets a chance to do something for the earth.

That conference made me perceive the need for people to communicate and be global, in order to reciprocate at least the oxygen that Mother Nature is providing us. Giving interview to the local Indonesian television on this topic is a memory will reminisce forever! Never felt more proud to say, I am from Bangladesh.

After a long time of seriousness, comes the fun part! Nothing is more fascinating than meeting new people, knowing their cultures, and being friends with them. No one even knows how, in these three days, people become friends. I still remember what my chair person told us, “It is the friendships that matter, people that matters, smiles that matter. Make friends and cherish the friendship, that’s how you become

global individual!” The three days long conference ended with a tour in some of the beautiful places in the city and magnificent diplomatic dinner and program night.

More people should be encouraged to join MUN, as it broadens the knowledge of the world, as well as helps to unleash the potentials one might not be even aware of! Let your inner voice speak, and speak for thousands of people and for their betterment. Make yourself proud. It’s now, or never!