Not so long ago, enthusiasts had virtually no choice but to turn to parts catalogs if they wanted a truck with serious off-road capability. But the introduction of purpose-built models like the Ford F-150 Raptor, Toyota Tacoma TRD Pro, and Chevrolet Colorado ZR2 in recent years changed the landscape for off-road machines. Much of this comes as a result of OEMs taking note of what owners have been doing to their trucks once they’ve left the showroom.

“A few years ago, if you had said that GM was going to have a vehicle that would dominate the overland market, nobody would have believed you,” says Dave Harriton. “It’s the enthusiasts within the company who have made that possible.”

It’s a dynamic that Harriton knows quite well. After building his own long-wheelbase Jeep Wrangler in college and putting together a well-received business plan for a company focused around modifying Jeeps, he decided to eschew incoming venture capital offers and instead take out a small business loan from a local bank to get American Expedition Vehicles (AEV) off the ground.

Established in 1997 and originally operating out of a humble garage in Missoula, Montana, AEV began building hot-rodded Jeeps and racking up Chrysler Design Excellence Awards at the Specialty Equipment Market Association (SEMA) shows soon after. That gained the attention of Chrysler brass, resulting in a partnership to help create and supply parts for special models like the Call of Duty edition JK Wrangler.

And that, in turn, put AEV on the radar of the engineering team behind the Chevrolet Colorado ZR2.

“With the locking differentials, the Multimatic suspension, and the diesel engine, [Chevrolet] knew it had some really good underpinnings,” Harriton explains. “So they came to us with the ZR2 and basically asked what we would do with it.”

The ultimate iteration of that collaboration is this, the AEV-upfitted Colorado ZR2 Bison. Built alongside standard Colorado ZR2 models in GM’s Wentzville, Missouri factory with AEV-supplied parts, the truck is something of an amalgamation, combining components from both American Expedition Vehicles as well as Chevrolet Performance to create an off-roader that goes above and beyond the ‘garden variety’ ZR2 to bring it closer to AEV’s original vision.

“We are 100% function driven,” Harriton explains, as we gaze upon the decidedly beefed-up Colorado. “Which is funny, because we have the most ‘form’ in the industry. But the form is always secondary to the function.”

Outfitted with the 2.8-liter Duramax turbodiesel mill, the ZR2 is already an adept off-roader by typical standards, but AEV doesn’t develop its parts for typical use. 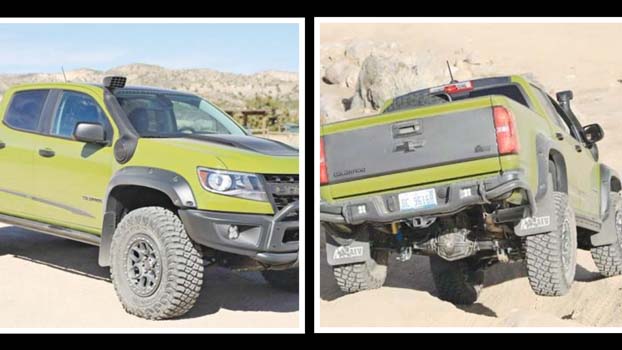 “Because it’s not a solid-axle rock crawler, we’re looking at this as an overlanding and touring vehicle – something you could drive from here to South America,” Harriton says. “So we looked at it from the perspective of what we would do to a ZR2 if we were planning a several-month trip down south.”

AEV also knows good engineering when it sees it, so rather than trying to completely reinvent the ZR2’s suspension and its trick spool-valve damper setup, here the Chevrolet Performance ZR2 front leveling kit supplements it, increasing the front end ride height 1.25 inches by way of high-angle upper control arms. These pair with upgraded ball joints that are sealed and protected against the elements found in off-road environments that tend to gum up the works.

The leveling kit not only provides a better approach angle for the ZR2, it also helps accommodate AEV’s Crestone DualSport wheels and the meaty 35-inch BFGoodrich KM3 tires our tester rolls on. It’s not quite enough, though.

“By adding the fender flares, it allows us to trim out and change the wheel opening a little bit for the clearance we need,” Harriton tells us. “That’s the kind of thing that GM just couldn’t do in the time frame that it wanted with an existing vehicle.”

While it’s largely business as usual in the cabin and under the hood, AEV components like the snorkel, front and rear bumpers, skid plates, and exterior lights add meaningful utility while also bolstering the overall aesthetic. And unlike the vast majority of aftermarket components, all of it was subjected to GM’s rigorous internal testing.

“GM went to the extent of creating a new airbag calibration for that bumper with the winch,” Harriton points out. “And I believe there were 11 separate crash tests that the truck went through to verify that the safety equipment and these new components would operate as designed in various situations. You just can’t do that kind of testing in the aftermarket – you don’t have all the base vehicle data. This allows us to provide a product to the consumer that’s fully validated.”

But with that came some OEM-caliber challenges, too.

“After we explained to GM what we wanted to do, they came back and told us we could only add 74 pounds to the vehicle,” he recalls. “At that weight limit they wouldn’t have had to do any additional testing. But we knew that was not going to be realistic – one skid plate could weigh that much.”

Regardless, AEV set to work finding ways to keep the poundage to a minimum, part of which included the use of hot-stamped boron steel for those skid plates. “Nobody has ever done anything like this before. Normally this is used for safety-related components – reinforcement for the A pillars, the B pillars, and the door beams. We had to go through a lot of hoops to make that material usable with a ‘Class A’ finish, which is what we’d apply to something you’d see and touch.”

The go-to material for skid plates is normally aluminum, but Harriton wasn’t keen on going that route.

“It’s relatively soft, it gouges easily, and it has to be very thick in order to have any meaningful robustness. So you’re looking at, say, a quarter-inch thick piece of aluminum for a skid plate, whereas with the boron steel, we’re between 1.2 and 2.5 millimeters thick, depending on which plate [we use]. And because it’s a hardened steel, it doesn’t gouge.”

In the end, AEV’s efforts were well worth the trouble – all the additional hardware adds just 200 pounds to the ZR2’s curb weight, and it somehow got GM to agree to the weight gain.

There’s clearly some wisdom in AEV’s approach to modifying the ZR2. Because the springs and dampers stay the same while the tire sidewall has increased, if anything, the AEV-tweaked ZR2 Bison is more compliant than the standard truck, both on the road and in the dirt. The additional mass does create more work for the Duramax diesel engine, but AEV’s switch to a 4.10 final drive ratio from the 3.42 factory gearing provides more than enough mechanical advantage to make up for the weight when digging out of an uphill rut at low speeds or hustling the ZR2 onto the highway.

Set to 4WD Low with the front locker active and the BFGs aired down to about 20 psi, the Bison dispatches the variety of obstacles and terrain found within the Hungry Valley State Vehicular Recreation Area in Gorman, California with a kind of effortlessness that makes this sort of abuse seem eminently repeatable.

And when switched back to pavement-friendly settings, the hopped-up Bison’s road manners are hardly discernible from a standard ZR2, albeit with a bit of additional tire roar. There’s no wayward steering or brittleness over imperfect road surfaces – another indicator that retaining the soft factory springs and fancy DSSV dampers was the right move for a truck that’s intended to see plenty of long on-road hauls over the course of an overlanding journey.

While AEV’s tweaks provide the ZR2 with an obvious dose of visual machismo, there’s an overriding sense that the function does take precedence over form here. This thing feels like it was built to be used, whether that entails hauling through the desert, clawing over rough terrain, or simply cruising down the highway.

“All these off-road components lend themselves to on-road travel as well. They have to,” Harriton notes. “If you’re in traffic in Mexico City and someone rear-ends you, you don’t want that to be the end of your trip. You want to be able to brush it off and continue exploring. To me, that’s just as important as how the truck handles in the rocks. Fortunately, those two things usually coincide well.”