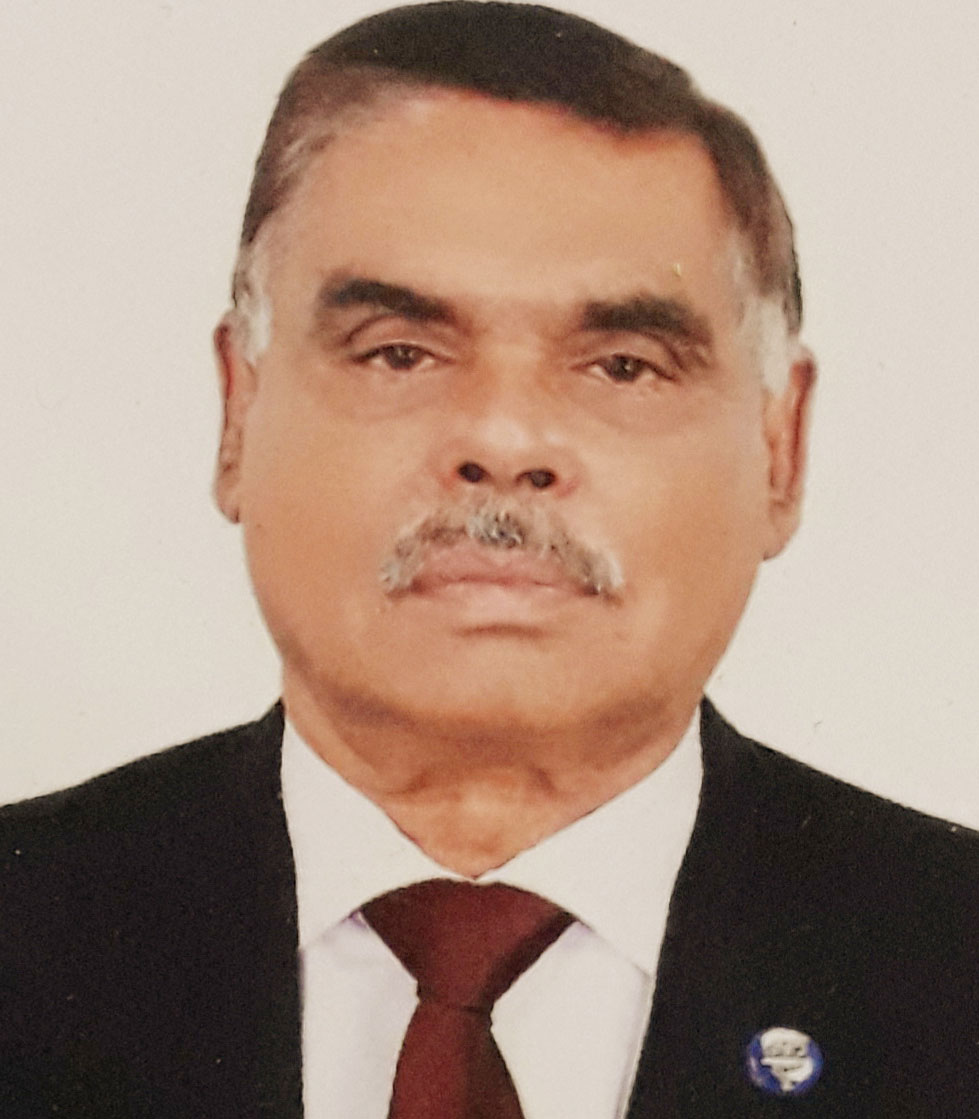 In 1965, Fatima Jinnah’s election campaign from Dhaka to Chattogram started from the railway and Sheikh Mujibur Rahman was also aboard the same train doing his electioneering. At that time, we the student league workers and leaders went to Narsingdi Railway station to greet Sheikh Mujib.

During Fatima Jinnah’s speech we  were looking for Mujibur Rahman and found him sitting next to the window of the train to observe the gathering of the campaign.

We requested him to say something to the people and in reply he only said with a heavy voice ‘No, you listen to Fatima’s Speech’ and directed us to work for her. He was in white ‘Pajama and panjabi and khadi Kurta, black framed glass on his eyes and smoking a black pipe. I was so impressed with his gesture that I could not help but think that the personality of a leader should be like this.

In 1969, after the mass-uprising, General Yahya Khan became the Military president. During the SSC examination in Narsingdi college centre, many agitated people clashed with Pak army at that time by throwing rocks at them.

Some army sepoys were injured in that incident. Though I was not present at the centre during that time but I was at Narsingdi. And the news of the clashes between public and army had spread like wild fire throughout whole Narsingdi.  As a student leader of Chhatra League I felt I should visit the spot and other examination centres to see the situation.

Accordingly I along with my elder brother Niranjan Saha (who was totally a non political person) visited centres riding on our 50 CC red motor cycle. But our movements were followed by DIB and other law enforcing agencies of Pakistan. I did not know that we would be arrested because of this issue as we were not present in the incident spot.

Yahya’s martial law was first disobeyed in Narsingdi and Pak army became serious about arresting all Student League leaders from Narsingdi. No leaders knew about the raid until the evening. While, other student leaders got the news at night that police will raid the houses of Chhatra League leaders at Narsingdi.

But we did not get any such news and were sound asleep at our home. I and my brother, Ganesh another worker of student league and four other persons including 2/3 teachers were arrested.

We were charged with martial law rule of 12 M. L. R.  which was the capital punishment of death. But by the grace of Almighty, with the interference of our great leader Bangabandhu Sheikh Mujibur Rahman we all got bail from the Narayanganj jail after 15 days.

At that time Chief Martial Administrator in Eastern zone was Shaheb Zada Yakub Khan and the Governor was Admiral Ahsan Khan to whom Bangabandhu told about us for which we got bail after 15 days. That is the reflection of his great leadership quality showing his full sympathy and love to the workers.

That was the main characteristics of  Bangabandhu Sheikh Mujibur Rahman. After coming back from the jail I went to Bangabandhu’s house at Dhanmondi. I was accompanied by my friend late Ali Akbar, freedom fighter, who also helped me in keeping touch with Tofael Ahmed and Anwar Huosain Manju about my bail.

They were directed by Bangabandhu. That day, Ali Akbar introduced me with Bangabandhu. After  greeting him, we took our seat in front of Bangabandhu who was wearing a ‘checkered lungi and white panjabi’ sitting on an easy chair.

Then he told me to not be nervous about the 12 M L R case. Although I was a little bit nervous as it was my first experience in jail. At one stage Bangabandhu was calling saying like “Hasur Maa , the boy who was arrested at Narsingdi, has come to see you.” I was a little bit astonished, I went to see her at the other part of the room which was divided by a curtain. First I greeted Begum Fazitunessa  Mujib when she was mixing a dough for dinner.

After the greeting, Begum Mujib told me, “Don’t be afraid, your leader is always with you.” I was really surprised and could not help but think how the wife of a great leader could be cooking food with her own hands so simply wearing a simple dress.

Then I drew conclusion , that’s why Bangabandhu became a great leader with the inspiration of Begum Fazitunessa Mujib, on that day, my heart filled up with respect for Bangabandhu and Begum Mujib.

Another important memory I still rememberd is that in 1970’s DUCSU first time direct voting system was held. General students of the Dhaka University voted to elect their DUCSU leaders. ASM Abur Rab and Abdul Quddus Makhan was elected as VP and GS of DUCSU being nominated from the then East Pakistan student league.

After the victory of 2-3 days, DUCSU and Student league leaders went to Bangabandhu’s house to meet our great leader, fortunately I was present at the DUCSU office on that day ,thus I also got opportunity to go with the leaders to Bangabandhu’s house  by rickshaws.we saw him sitting on his easy -chair with chek lungi and white panjabee with his pipe.

We all sat on the floor in front of Bangabandhu. Then we started introducing ourselves with the Bangabandhu.  The very moment I told my name as Swapan Kumar Saha, Bangabandhu was saying like that  “I do not want to see dream, now I want to implement my dream, and singing at a slow voice, song  of poet Rabindra nath Tagore “Amar Sonar Bangla, Ami Tomay Bhalobashi”.

By this time Sheikh Fazlul Hague and Serajul Alam Khan came to the door, where we were sitting, keeping their hands each other on their shoulder, Bangabandhu told the leaders from now on keep in touch with Fidel Kestro and Che Guevara for any discussion, don’t come to me. All his comments were really significant, then I realised slowly.

Why Bangabandhu told like that and we understood that for a long they had been working for Independence of Bangladesh and saw the nucleus meeting at night at Jagannath Hall of D.U.

In 1972, First Durga puja in Independent Bangladesh was held in the old part of Dhaka City as well as other parts of country. But Idols (Images) of Goddess Durga were damaged by some miscreants at night. At this incident Hindu community protested saying how the miscreants could do it in the new Bangladesh.

To communicate our concern to Bangabandhu, JN Hall Chhatra league unit president Swapan K Saha , GS Sailen  Majumder  and Hare Krishna Debnath went to Old Ganabhan. Bangabandhu told us I know who the culprits were, you do not think of it.

I will do the needful saying that he gave us take 500.00 to eat sweets on the day which was ‘Bijoya Dashami’. Of the five-days Durga puja, we did not think of Bijoya Dashami on the day but Bangabandhu rightly remembered us the day.

In 1973 Bangabandhu received ‘Julio curi’ Honour from the World peace Council. To convey our congratulation ‘Narsingdi Agrani Club members under my leadership went to Ganabhaban.

During the photo session with the Bangabandhu we all stood, Only Food Minister Fani Bhutan Majumder sat beside Bangabandhu in a three seated sofa. Looking at me Bangabandhu called me to seat in the middle of the sofa, accordingly I did it.  Still that rare picture with Bangabandhu is in framed in my house.

This news with the group picture published in two papers. It was my rare opportunity to seat with the Father of Nation Bangabandhu Sheikh Mujibur Rahman.

In 1974, I was the Social welfare Secretary in central committee of Bangladesh Chhatra league. Central committee selected me and other student leaguers for Comsomal six month training in USSR (Soviet Russia). On the day of departure we went to New Gonobhaban to seek Bangabandhu’s blessings.

As I was a group leader of a five- member team, he told me that since you are going to Russia that is very good, ‘but don’t sale your brain, try to give our own ideas to them’, and also said read attentively and maintain discipline there. We tried our best to keep Bangladesh's prestige in Russia.

In a marriage reception at the Purbani Hotel Bangabandhu attended the reception along with his senior cabinet colleagues. Central committee leaders of Chhatra league also went to the reception. We saw Bangabandhu with other ministers taking food in a separate room.

Everybody remained silent; I was so amazed as well as very happy. The post marriage reception was given to the sister of Sheikh Fazlul Haque Moni. Naziur Rahman Manju, married Moni Bhabi’s sister possibly in early 1974.

After the division of Bangladesh Chhatra League, two separate conferences were held at Surhrawary Udyan with the spirit of Mujib ideology called “Mujibbad inaugurated by Bangabandhu Sheikh Mujibur Rahman where the joint convenor of the conference preparatory committee was Abdul Quddus Makhan and Swapan Kumar Saha.

It was a great opportunity as a joint convenor to seat with the Father of the Nation Bangabandhu Sheikh Mujibur Rahman on the stage along with big bosses of the Chhatra league.

Other part of Chhatra League conference was held at Paltan Maidan with the slogan of scientific socialism inaugurated by Father of Shaheed Swapan chowdhury who was killed in a fight with Pak army in the Chattogram Hill tracks area.

Trump’s main challenger in 2020 may be Warren

Putin’s art of the purge

What can we expect from this year’s East Asia Summit?