The government has undertaken a new pilot project to ensure all civic amenities in all the villages for reducing human pressure from the already-crowded capital, other metropolitan cities and district towns.

The scheme has been taken up under the mega project “My Village, My Town.”

Initially, in the pilot project, 15 villages in six divisions of the country will be given facelift as model ones.

In a high-level meeting of representatives from several ministries, led by the Ministry of Local Government, Rural Development and Co-operatives, recently decided to take up such a project.

In a recent meeting titled "My Village My Town: Extension of Urban Amenities to Each Village" chaired by the LGRD Minister, various directions were provided to boost up the Prime Minister Sheikh Hasina’s priority project. 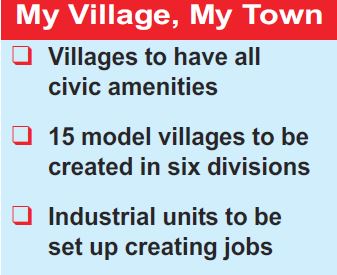 According to the meeting, a technical project has been taken to make “My village, My Town” a pilot project. As part of this, it will be experimented how the implementation of this action plan in a village works. If it becomes successful, 15 model villages will be created later. Afterwards, the government will include every village in the project.

LGRD Minister Tajul Islam during the meeting said, “Plans have been taken to bring eight villages in eight divisions and seven villages in seven special zones of the country under the project of “My Village, My Town”. For this, an initial plan has been adopted and activities have started”.

According to the government plan, Bangladesh will be developed in 2041. As part of the plan, the disparity between town and village will be gradually bridged. Different ministries of the government will jointly take necessary steps to ensure all kinds of benefit to the citizens.

Like the developed world, every village in the country will be made like a city. Each self-contained village will have electricity, water, health, education, improved sanitation, waste management, modern roads and bridges, markets, playgrounds, parks, and recreation centers. ‘Model Villages’ will be created with all civic amenities.

The Ministry of Local Government, Rural Development, and Cooperatives will be the main leader in implementing this initiative. Every ministry and concerned department or institution of the government will assist in its work. If this initiative is implemented, the pressure on the city will be diminished.

All the necessary arrangements for a better life with various civic amenities will be made in the village itself. Small and large scale industrial units will be set up in the villages to create adequate employment opportunities.

Initially, the initiative of 'My Village, My Town' will be implemented as an election promise of the present government with eight villages in eight divisions and seven villages in seven special zones.

At the same time, every village will be transformed into a modern city by expanding the market for quality consumer goods including electrical equipment.