Hidden not far from downtown Austin, Texas, a research lab is working to change the way we recycle electronics. And it's being run by Apple.

There is a 9,000-square-foot warehouse where, just a stone's throw from the front door, you'll find one of the most interesting robots in the world.

Daisy the 33 feet long robot, has five arms and can methodically deconstruct any of 15 iPhone models -- from 2012's iPhone 5 to 2018's iPhone XS -- at a rate of 200 per hour. In a coordinated and sometimes violent dance, Daisy removes the screen, battery, screws, sensors, logic board and wireless charging coil, leaving its husk of an aluminum shell.

Last year, Apple announced Daisy for the first time to the world via a press release and video. Now it's inviting in academics, recyclers and other companies to learn how Daisy works.

Apple is one of the world's top phone makers, shipping an estimated 218 million iPhones last year alone. Sometime this year it may pass 1.5 billion iPhones since the first one debuted, meaning in a little over a decade, Apple's shipped enough phones to circle the planet more than 13 times. That's great for Apple's bottom line, and helped to turn the Cupertino company from a niche computer maker into one of the world's most highly valued companies -- ever. But it's not so great for an employee's conscience. Apple's mammoth success -- and the business of countless other computer and gadget makers -- has come at a high cost, counted in untold tons of aluminum, cobalt, copper, glass, gold, lithium, paper, plastic, steel, tantalum, tin, tungsten, zinc and many other raw materials that are smelted, extruded, compressed, etched and polished into the magical device you're using to read this story.

"You have a perfect storm brewing of everyone needs this stuff and the supply is rapidly shrinking," said Callie Babbitt, an associate professor of sustainability at Rochester Institute of Technology. Some materials could be used up in the next half century, she said, leaving us without key components for the screens on our TVs and tablets, or pieces that help magnets make the alert vibrations on our watches and phones.

Another problem comes when we upgrade to new devices, something the tech industry encourages through warranty expiration's and payment contracts. Our old ones often go in a drawer as a backup "just in case" phone. Or we may ship them off to an e-recycler that shreds or smashes them to collect the materials as efficiently as possible. Worse, we might just toss our once-loved phone into a landfill.

You could see Daisy as Apple's attempt to right some of these wrongs. But if you squint and look another way, Daisy might look like an expensive and cynical PR ploy by one of the world's richest companies to whitewash the damage it's doing to the planet through its massive size.

"I call her Daisy the Deathbot," said Kyle Wiens. 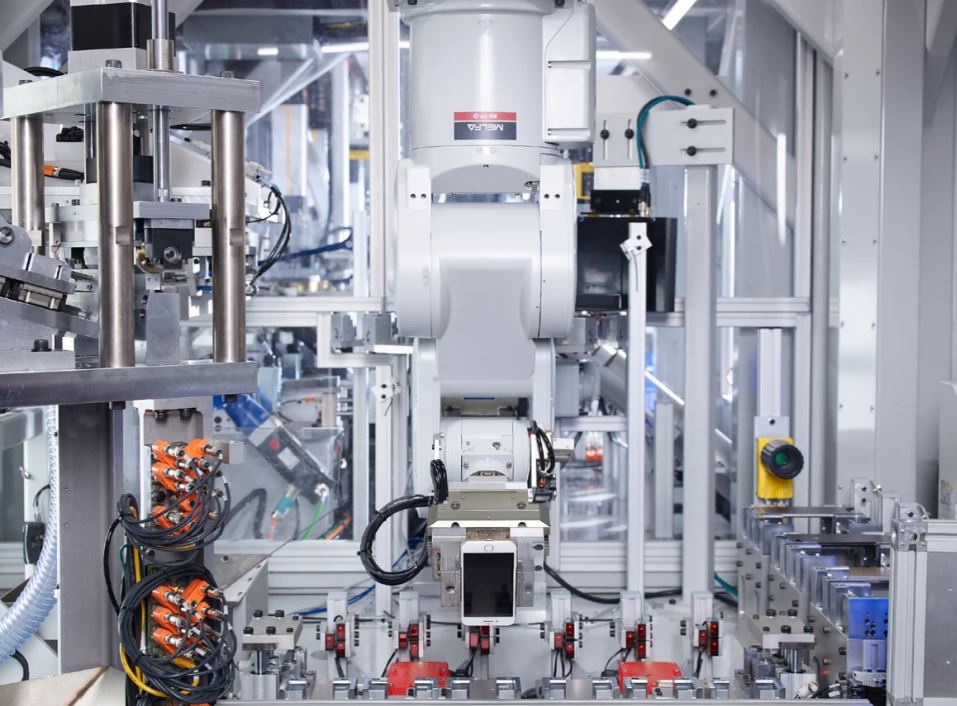 Wiens is a tech repair advocate and head of online instruction site iFixit. He's spent his career doggedly challenging Apple and other tech companies to make their devices easier to repair.

He's also spoken to legislators around the country to encourage "right to repair" laws, forcing companies to allow people access to tools and information to service their devices. And in 2016, he sold $21 million worth of tool-kits and parts to help people swap out bad screens, cameras, buttons and batteries on their devices.

One challenge is Apple's secretive culture, he said. The company holds so many things close to the vest, from its plans for the next iPhone's to the repair manuals to fix them to the technology behind Daisy. That makes it hard for us to determine what's real and what's just marketing. What if Apple did the next best thing and let companies come in, see how Daisy works and try to retrofit some of that technology to existing recycling programs?

"That would be interesting," Wiens said.

Apple built Daisy to help with what's known as end-of-life iPhone's. It would cost too much to refurbish these devices back to perfect working order, so Daisy guts them instead, stripping out their parts to be recycled into raw copper, aluminum, cobalt and other materials so they can be used anew.

All told, of the roughly 9 million iPhone's Apple received back from customers last year, 7.8 million were refurbished and sent to new users, while 1.2 million were sent to Daisy.

Apple understands not everyone has near-infinite money and resources like it does. The iPhone maker notched nearly $20 billion in profit during the holiday season last year, and it has more than $245 billion in cash and investments to draw from. That helps pay for the significant cost behind building expensive machines like Daisy.

To point other companies in the right direction, Apple's purchased large shredders and pounding machines you find at most e-recyclers around the world. It's also set up tables alongside them so that the people who come into its lab can work with Apple to retrofit technology like Daisy's innovations onto the existing technology most recyclers already have.

Apple plans to patent and license Daisy's technology too.

"Technology by definition is all about the new, about things that couldn't happen before but now it can because of some remarkable innovation," Apple VP Jackson said.

Jackson joined Apple in 2013 after a long career in government, working as the commissioner of environmental protection in New Jersey, the chief of staff to the governor of New Jersey and ultimately, for President Barack Obama, as the first African American to lead the Environmental Protection Agency.

HP, the second biggest PC maker, said that its paper and packaging no longer come from deforestation, which some of its products are made with recycled plastics and that it offers some of the most easily repairable computers in the industry.

Lenovo, the world's largest computer maker, says it's been increasing its use of recycled plastics in the devices it sells.

And Samsung, the world's largest phone maker, says its recovered 28.3 million metric tons of its products, including TVs and refrigerators, to be refurbished or e-cycled. It's also pledged to create a "closed loop" recycling program, similar to Apple's efforts.

But experts say all the tech giants have a ways to go before they undo the waste their customers put into the world.

"The companies are experts at creating products, but not experts at reverse logistics, bringing their products back to the smelters of the world," said Mathy Stanislaus, a fellow at the World Resources Institute.

Daisy is actually Apple's second-gen recycling robot. The first was called Liam. Announced in 2016, it was designed to work with the iPhone 6.

Apple chose to focus on the iPhone because it's among the toughest products to recycle and because it sold a bunch of them. Eventually, Jackson said, the lab will work on iPads, Macs and even AirPods too.