Yasujirō Ozu (12 December 1903 – 12 December 1963) was a Japanese film director and screenwriter. Tokyo-born Ozu was a movie buff from childhood, often playing hooky from school in order to see Hollywood movies in his local theatre.

Yasujirō Ozu is not a household name—at least not on this continent. While he enjoyed some international recognition in the 1950s and 60s, when a few of his works were first shown in the United States, the Japanese director and screenwriter was not a showman. His films were made of quieter stuff than Akira Kurosawa’s, and for an American public just emerging from the thrall of Italian neorealism, they didn’t seem all that cinematic.

At the time of his death, he was all but unknown except to Japanese audiences--and even there, his popularity was limited. Today, if you polled the world's film critics, asking them who was the most universal and beloved of all directors, Ozu would rank at or near the top of the list, along with Jean Renoir, Orson Welles and Alfred Hitchcock.

Yet Ozu is not as well known as those other directors, perhaps because his films only began to be known in the West after his death. Now a touring retrospective of 10 of his films, in sparkling new 16mm prints, is touring the country. If you are not familiar with his work you have the opportunity to discover an artist who may become very close to your heart--one of your personal benchmarks. Ozu's stories are all seemingly so very simple. A young woman cares for her widowed father, who wants her to marry and lead a life of her own. Elderly parents come to visit their children in the big city, and receive a distracted welcome. The leader of a troupe of traveling actors returns to a small town where, years before, he fathered a son. Two teenage girls plot to outwit their parents plans to marry them in a traditional manner. 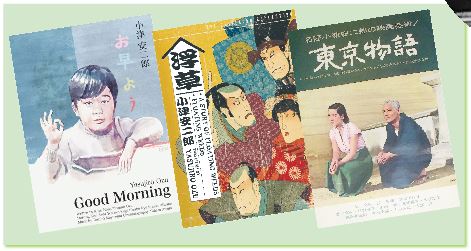 We are programmed to think in terms of "foreign films," as if somehow their values are just as foreign as their languages. With Ozu, that is not the case. Ozu's "Tokyo Story" (1953) unfolded, telling of the old couple who come to visit their children and are received correctly but distractedly, there was first of all complete silence in the auditorium, and then I began to hear snuffling and the blowing of noses, and when the movie was over and the lights went up it was clear that for many of the viewers it had been a powerful emotional experience. Weeks later, when the class ended, it was agreed that none of the other "greatest films" had equaled the Ozu in its emotional impact.

There is an irony there, because for many years Ozu was considered by Japan's film authorities to be "too Japanese" to be understood by Western audiences. One of the greatest of experts on Japanese films is Donald Ritchie, an American who has lived in Tokyo for 40 years. When he proposed in 1962 to bring a program of Ozu's work to the Venice Film Festival, he was discouraged even by Ozu's distributors, who feared the films would not play well before non-Japanese viewers. The overseas success of such directors as Akira Kurosawa could be explained, they said, because his films were more westernized; his samurai epics, for example, were easily assimilated by fans of Westerns.

Ritchie persisted, and the Ozu films were hailed at Venice with a tumultuous reception. Ozu died the following year. His final film was "An Autumn Afternoon" (1962). Like most of his others, it was a domestic drama, about small adjustments and large buried feelings on the part of people who live together and know each other very well. Ozu was born in Tokyo in 1903, and began working in the film industry at the age of 20, after an unsuccessful educational career (he was an unruly student). His first film as a director was made in 1927, and between then and his death he made some 54 films, almost all on themes of domestic life. The traveling retrospective includes one of his silent films, "I Was Born, But..." (1932), about a suburban office worker who is timid, and tries to be stronger, and finds he is not convincing in the role.

In the days when Ozu learned his trade, the Japanese film industry was unique in the entire world, in having developed its own conventions for the framing and editing of shots. The rest of the world tacitly agreed on certain conventions.

In early Japanese films, this principle of intersecting eyelines was not followed, and although all other Japanese directors eventually came around to the Western editing codes, Ozu never did. During conversations, his characters are likely to seem to be looking away from one another (a Japanese characteristic, since looking directly in another's eyes is avoided). More frequently, they will side side by side while they talk, both looking into the distance.

Another characteristic of Ozu films is the camera placement. Most movies place the camera lens at the eye level of a person who is standing. Ozu usually places it at the eye level of a person who is squatting on the floor in a traditional Japanese posture. It is from this position, he feels, that a typical Japanese might usually view the world. He has other subtle trademarks that give his films a distinctive feel. Often he will begin a shot before the characters enter the frame, or hold it after they have left the frame. That gives us a sense of place, of time, of the silence surrounding the action. It also declares the director's independence from the characters; he need not follow them everywhere they go, but can anticipate them, or linger behind. In any Ozu film, the action is also punctuated by what he called "pillow shots," shots of an exterior detail--smokestacks, perhaps, or trees or clouds. These help govern the rhythm of a film, and are inspired by the "pillow words" in Japanese poetry which serve the same function.

Yasujirō Ozu is not a household name—at

least not on this continent. While he enjoyed

some international recognition in the 1950s

and 60s, when a few of his works were first shown

in the United States, the Japanese director and

screenwriter was not a showman. Today, if we poll

the world's film critics, asking them who was the most

universal and beloved of all directors,

Ozu would rank at or near the top of the list

Ozu is also cheerfully willing to "cross the line" visually--a taboo among western directors. That means that after he establishes a point of view for a scene, he is willing to rotate his camera 180 degrees without any intervening shots to orient us, so that characters who were on the left are now on the right, and vice versa. To help us read such shots, he often puts an object in the foreground (a distinctive little red kettle is a trademark), so that in the reverse shots, by seeing that it has flipped to the other side of the screen, we can figure out what has happened visually.

Such visual devices subtly combine to make an Ozu film feel different from other films. The pacing, the compositions and the techniques build up a particular voice, so that entering a new Ozu film, we are immediately put on notice that we are in the hands of an individual who goes his own ways.

But if Ozu seems nonconformist in his style, his stories are simple, clear and human. He works again and again with the same actors, and often remakes versions of the same stories. The repeated references to the seasons--spring, autumn--reflect the stage of life of the central character. Most of his films are in black and white, although two in the retrospective are in color: "Equinox Flower" (1958) and "An Autumn Afternoon." Missing is Ozu's most famous color film, "Floating Weeds" (1959), the story of the traveling actor who returns to the town where he has left behind a son. But the film is widely available in video, notably on a Criterion laserdisc. What's exciting is that the retrospective includes a rare 16mm print of Ozu's 1934 silent black and white version of the same story.

To love movies without loving Ozu is impossible. When I see his films, I am struck by his presence behind every line, every gesture. Like Shakespeare, he breathes through his characters, and when you have seen several of his films you feel as if you must have known him. What is strange, considering that his films were once considered too Japanese to even be shown in the west, is that you also feel you have known his characters--some of them for all of your life.

Vandalism won’t be tolerated in the name of movement: LGRD Minister