Local admin hands over houses to homeless in dists

The local administration has handed over ownerships of houses to the beneficiaries in various districts after Prime Minister Sheikh Hasina virtually inaugurated distribution of the houses among homeless families from her official residence Gonobhaban on Saturday.

In the first phase under the Ashrayan Project, the government has built 66,189 houses at a cost of Taka 1,168 crore for homeless and landless people on the occasion of Mujib Barsho as well as the birth centenary of Father of the Nation Bangabandhu Sheikh Mujibur Rahman.

Each of the houses was built on two decimals of land having two rooms, one corridor and one latrine alongside connection of electricity and water. The houses were built on Khas land. Building each house costs around Tk 1.71 lakh.

Our correspondents from several places across the country sent news item on handing over of pucca houses to the landless and homeless families.

In Pabna, on the occasion, a total of 1,086 landless and homeless people received houses along with two decimal of land as PM’s gift in Mujib Barsho, reports our Pabna Correspondent.

Meanwhile at Ishwardi of the district, a total of 50 landless and homeless people received houses on the occasion. Ishwardi upazila administration handed over the houses to the beneficiaries, after the Prime Minister officially inaugurated the distribution, reports our Ishwardi Correspondent.

According to the Ishwardi Upazila Project Office, construction work of 33 houses in Muladuli, 10 in Lakshmikunda and 7 houses in Sara union in Ishwardi Upazila was started on government Khas land under the project. Ishwardi UNO PM Imrul Kayes, Ishwardi Municipal Mayor Abul Kalam Azad Mintu and others were present at the time.

In Natore, Prime Minister Sheikh Hasina has handed over houses and land to 558 landless farmers of Natore through video conference, reports our Natore Correspondent

At the video conference held at the conference room of Natore sadar upazila, Deputy Commissioner of Natore Shahreaz, Superintendent of Police of Natore Liton Kumar Saha and Sadar Uapazila Chairman Shariful Islam were present, among others, on Saturday morning. 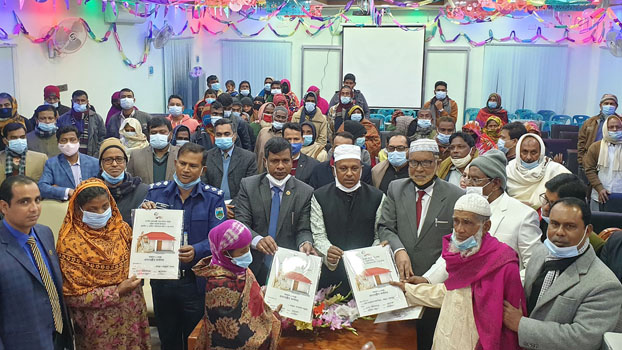 It is learnt 558 houses in Natore were constructed at a cost of Taka nine crore 54 lakh and 18 thousand. Deputy Commissioner, Natore, informed in addition to the 558 houses, 90 more houses for the destitues are being constructed through the Zila Parishad and the Members of Parliament.

In Faridpur, a total 1,480 homeless and landless families of nine upazilas of the district received houses under Asrayan-2 project marking Mujib Barsho reports our Faridpur Correspon­dent.

After Prime Minister's official inauguration, Deputy Commissioner (DC) of Faridpur Atul Sarkar handed over the houses to the beneficiary families at a function at Faridpur Sadar Upazila Parishad Hall Room. 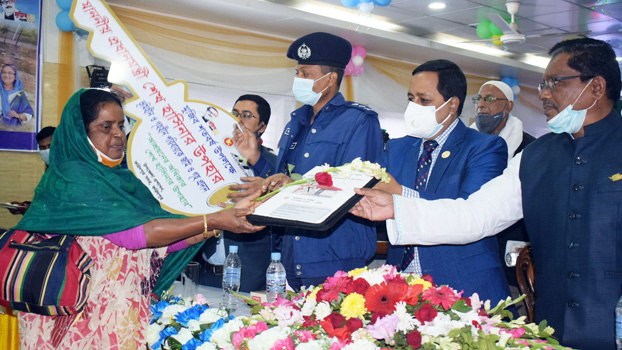 Deputy Commissioner (DC) of Faridpur Atul Sarkar hands over the key and land deed of a house to a beneficiary woman at a function at the conference room of Faridpur Sadar Upazila Parishad on behalf of the Prime Minister on Saturday.

In Jamalpur, a total of 295 homeless and landless families at Sarishabari upazila in the district received the houses as Prime Minister’s gift under Asrayan-2 project, reports our Sarishabari Correspondent.

After Prime Minister's official inauguration, the beneficiary families were handed over the houses and land deeds at Sarishabari Upazila Parishad Auditorium by State Minister for Information Dr. Murad Hasan, MP.

In Jhalokathi, 230 landless and homeless families received houses under Asrayan-2 project after the Prime Minister officially inaugurated the distribution, reports our Jhalokathi Correspondent.

On the occasion, documents of land and keys of house were handed over to the beneficiaries at a function organised at Jhalokathi Sadar Upazila Parishad auditorium. 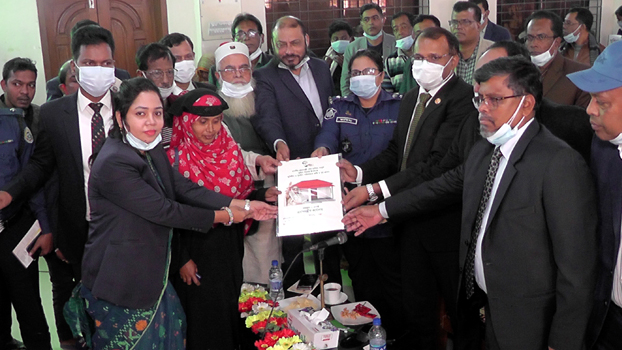 A woman with a smiling face receives the key and land deed of a house as Prime Minister’s gift marking Mujib Barsho from Jhalokathi DC Md Johar Ali and SP Fatiha Yasmin at a ceremony in the district on Saturday.

In Chuadanga, a total of 134 landless and homeless people received houses in Chuadanga after PM’s inauguration, reports our Chuadanga Correspondent 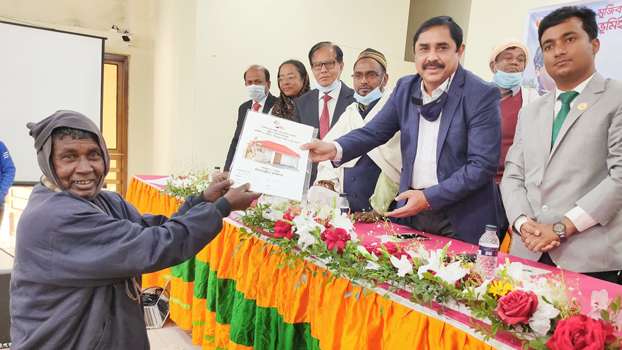 Chuadanga-2 MP Md Ali Azgar Togor hands over the key and land deed of a house to a beneficiary at the distribution ceremony at Jibannagar upazila of Chuadanga on Saturday.

In Bagerhat, 17 landless and homeless families in Chitalmari upazila got their dream address through receiving the keys and deeds of the new houses as gift from the Prime Minister.

Chitalmari Upazila administration officially handed over the house keys and the land deeds among the beneficiaries at Chitalmari Sadar Union Parishad. 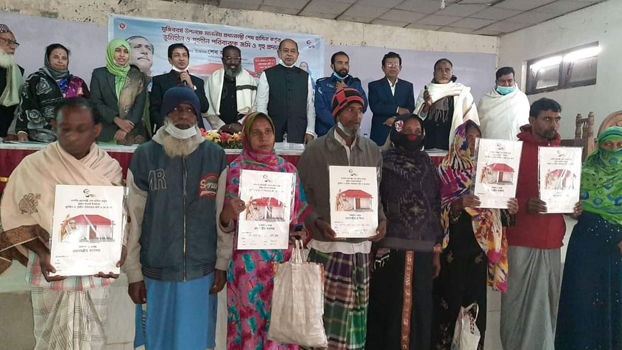 Chitalmari UZ Chairman Ashok Kumar Baral along with 17 homeless families poses for a photo after handing over house keys and land deeds to them on behalf of the Prime Minister at Chitalmari Sadar Union Parishad auditorium in the upazila of Bagerhat on Saturday.

In Rangamati, some 268 houses were handed over to the landless and homeless destitute people in seven upazilas out of ten in Rangamati hill district after inauguration of the house hand over programme by the prime minister Sheikh Hasina through video conferencing, reports our Rangamati Correspondent.

The programme was held at the hall room of Rangamati Gymnasium in the town.

As part of this programme, total 736 houses will be constructed in ten upazilas in Rangamati. Meanwhile, in the first phase 268 out of 736 houses were handed over as the construction works of these homes have been completed.

The remaining 436 houses will be handed over after completion of the construction works, said deputy commissioner in Rangamati AKM Mamunur Rashid

In Magura, a total of 115 houses have been handed over to landless and homeless families in the district, reports our Magura Correspondent.

These houses have been constructed in different areas of four upazilas of the district.

During a visit to Ujgram in Shalikha upazila of district, landless Murad Hossain, who was allotted a house there, said he had no land of his own. He could not afford a house. He is very happy to get a permanent place to live as the government has given him a house. He wished Prime Minister Sheikh Hasina a long life and expressed his gratitude for this.

Dipali Khatun of Laxmipur village in Sadar said, “I don't have any land of my own. My husband died a long time ago. We were spending the day in a broken tin house at my brother's house with our disabled son. I am very happy to be allotted a government house. I can now live in peace with my son in a pucca house.”

In Manikganj, a total of 135 landless and homeless families of the district received keys of their new houses as a gift from Prime Minister Sheikh Hasina, reports our Manikganj Correspondent.

Deputy Commissioner (DC) of Manikganj SM Ferdous formally handed over the keys of the houses to the beneficiaries at a function at his conference.

District Relief and Rehabilitation officer Md. Awlad Hossain said each of the semi-pucca houses with two bedrooms, one kitchen, one toilet, common space and veranda was built at a cost of Taka 1.71 lakh.