Michelangelo Antonioni was an Italian film director, screenwriter, editor, painter, and short story author well-known for his intricately aesthetics and extremely thought-provoking, yet evasive and mostly puzzling films. He was born on September 29, 1912, in Ferrara, Emilia-Romagna, Italy of well-to-do parents.

As a child Antonioni developed interest in the arts that included music and painting. An exceptionally bright child he played the violin and performed in a concert for the first time at the age of nine. Later his interest in music was overpowered by cinema but his love for painting remained throughout his life. He attended the University of Bologna from 1931 to 1935 and completed his graduation in Economics. While in the university he became associated with student theatre. Thereafter he started working as a bank teller and also contributed as a film journalist writing stories and film reviews in the local Ferrara newspaper ‘Il Corriere Padano’. He also became an amateur tennis champion for northern Italy while in his twenties.

He relocated to Rome sometime in 1940. There he met his first wife, Letizia Balboni, whom he married in 1942. After separating from her, he had several relationships with other women, including one with Monica Vitti, the actress who shared with him the international success of his 1960s films. He married Enrica Fico, in 1986.

Antonioni’s interest in cinema found its early expression in the film reviews he wrote first for the local Ferrara paper, II Corriere Padano, and later, during his early stay in Rome, for the important magazine Cinema. He enrolled for some time at the Centro Sperimentale di Cinematografia and collaborated on the script of ‘Roberto Rossellini’s Un pilota ritorna’ (A Pilot Returns).

His first credited film work dates from his 30th year, when he collaborated on the scripts of some major feature films, one of them Roberto Rossellini’s ‘Pilota ritorna’ (1942; A Pilot Returns), and went to France to assist the director Marcel Carné on his wartime production ‘Les Visiteurs du soir’ (1942; The Devil’s Envoys). In 1943 he began to direct his own first film, a short documentary called ‘Gente del Po’ (People of the Po Valley), but its completion was interrupted by the chaos of Italy’s defeat in World War II. For a while Antonioni made his living by translating from the French; he then became film critic of the underground paper ‘Italia libera’ (“Free Italy”) and wrote some unproduced scripts. Gente del Po finally appeared in 1947; it was followed by six more shorts and then, in 1950, by his first feature, ‘Cronaca di un amore’ (Story of a Love Affair), a rather bitter romance that immediately established him as a talent to be watched.

After that time, Antonioni’s life, to the outside world at least, consisted of little more than the production of films. The landmarks are his first great film, ‘Le amiche’ (based on a story by the Italian writer Cesare Pavese), in 1955; his first big international success, ‘L’avventura’, in 1960; his first film in colour, ‘Deserto rosso’ (The Red Desert), in 1964; his first full-length English-language film, ‘Blow-up’, in 1966; and his first American film, ‘Zabriskie Point’, in 1970. He was responsible for shaping the career of the actress Monica Vitti, whose exquisite, mysterious presence provided the warming touch of human interest that assured ‘L’avventura’, despite its puzzling narrative structure and obscurity of motive, its breakthrough to a large international audience. Some mediation of this sort is necessary in Antonioni’s films since without it his approach remains too cold and abstract to reach more than a select, esoteric audience. Human beings for him are depicted as moving parts in a pictorially exquisite pattern of moods and atmospheres; they wander around unable to engage in meaningful action, uncommunicative, lost in their dreams, while the outside world mirrors the feelings they never express, their alienation from one another and from the life around them.

With ‘L’avventura’ (1960)–and the other two films that immediately follow it, ‘La notte’ (196I) and ‘The Eclipse’ (1962), Antonioni established himself as one of the most talented, innovative, and technically accomplished Italian filmmakers.

Antonioni’s interest in technical innovations brought him to experiment with a video camera for ‘The Mystery of Oberwald’, (1980), a film based on a play by Jean Cocteau. With ‘Identification of a Woman’ (1982), Antonioni returned to Italian characters and situations. In 1995, after years of silence due to illness, he co directed with Wim Wenders his  comeback film, ‘Ai di fa delle nuvole’ (Beyond the Clouds). In the same year, Antonioni was awarded an honorary Oscar for his lifetime commitment to the cinema. Antonioni’s final film, made when he was in his 90s, was a segment of the anthology film Eros (2004), entitled ‘Il filo pericoloso delle cose’ (The Dangerous Thread of Things). 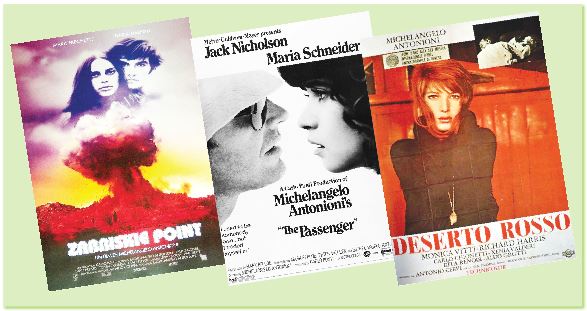 One of the cinema’s leading aesthetes, Antonioni spearheaded a critical and commercial reaction against the overwhelming acceptance, during post-World War II years, of unvarnished reality as a cinematic ideal. Under his direction the film became a metaphor for human experience, rather than a record of it.

He never structured his films around a traditional plot or a character analysis; it was rather the visual image that became his fundamental vehicle of expression, most noticeably, the modern industrial landscape. After Antonioni, few people saw a water tower or a plastics dump with quite the same unappreciative eyes; in his films a new kind of beauty was revealed in the mechanical jungle of 20th-century urban society.

Antonioni’s place in the history of the cinema and in the development of 20th-century sensibility, however, remains secure. In 1995 he received an Academy Award for lifetime achievement.

Antonioni's plots were experimental, ambiguous, and elusive, often featuring middle-class characters who suffer from ennui, desperation, or joyless sex. Film historian David Bordwell writes that in Antonioni's films, "Vacations, parties and artistic pursuits are vain efforts to conceal the characters' lack of purpose and emotion. Sexuality is reduced to casual seduction, enterprise to the pursuit of wealth at any cost." The New Yorker wrote that "Antonioni captured a new bourgeois society that shifted from physical to intellectual creation, from matter to abstraction, from things to images, and the crisis of personal identity and self-recognition that resulted," calling his 1960s collaborations with Monica Vitti "a crucial moment in the creation of cinematic modernism." Richard Brody stated that his films explore "the way that new methods of communication—mainly the mass media, but also the abstractions of high-tech industry, architecture, music, politics, and even fashion—have a feedback effect on the educated, white-collar thinkers who create them," but noted that "he wasn’t nostalgic about the premodern."

Antonioni died aged 94 on July 30, 2007 in Rome, just a few hours after the death of another renowned film director, Ingmar Bergman.  He was buried in his home town of Ferrara on August 2, 2007.

Two held with 399 bottles of Phensidyl in Phulbari