In conversation with Aly Zaker

Aly Zaker needs no elaborate introduction to the Bangladeshis. Since 1972 they have become aware of this towering personality who dominated the stage with stellar performance one after another in plays like Macbeth, Galileo, Tempest, Hamlet, Nurul Diner Sarajibon, Darpan etc.

With his strong and larger than life stage appearance he could draw audience to the stage at Baily Road for the next one decade or more thus adding many feathers to his hat. An educated man, Aly Zaker is not only a refined actor but an intense reader of novels, plays and short stories in both English and Bangla language as well. He is at the same time an interesting conversationalist. A successful businessman, Aly Zaker raised his children with great care and love. His wife Sara Zaker and son Iresh Zaker also enjoy popularity as stage and television actors and presenters. Below are the excerpts of the interview.

How was your childhood like while you were growing up to the time until you graduated?

I was born in 1944 in Chittagong but spent my childhood days shifting from one place to another as my father had a transferable job in the government. So, every one and a half years to three years he used to get transferred and therefore, I had to move along with him. As a result, there was difficulty in putting me through the systematic procedures of education.

After that, I arrived here at Dhaka and got admitted in the fourth grade and from there I completed my education and got college education from Notre Dame College. But, my education until fourth grade was cared for by my home tutors.

Later on, after graduating from Notre Dame College I got admitted into Dhaka University and graduated from there.

Was it a bit difficult to cope with the other students not going through the system?

As my initial years were adequately covered by the private tutors during home schooling there were no such problems. Later on, when I got admitted I was just taken in well for whichever class my parents applied for. I was able to cope quite well. I wasn’t a brilliant student but I was quite good. I never faltered in my class.

How did you come to participate in the Liberation War of 1971?

It was one year after I was in a job that the War for Independence had started. Our life was quite active and colourful. It was not monotonous like you had to have a good education, then get a good job and then get married. It was not something like that.

Ours was a very engaged way of lifestyle in our youth. I often say that why I didn’t have any affairs in my youth was that I was very busy with activities which were connected with our nationhood. I did not belong to any political party but I actively participated in the happenings.

The time called for it. You had to go out and participate. If you didn’t then you would be recognized as a weird person. So, we had a very intense, engaging and interesting lifestyle in our youth.

Where were you serving during the Liberation War?

I was already at Asiatic 360. But the name was different. At that time it was called East Asiatic Advertising Limited. I was already a senior executive at the age of twenty four.

I thought to myself then whether I should continue with my job or should I go to the Liberation War. The colleagues and compatriots I had at the company told me that I could do whatever I wanted, they weren’t going to stop me. They said that they would miss me but they wouldn’t ask me to stay back for them. I was ticked off as the next manager of the company.

I left that offer and went on to join the Liberation War.

Which sector were you assigned to during the war?

The digitalization of the country brought by honourable Prime Minister is a commendable initiative which has made the country advance very far. Do you think digitalization is pushing the idea of nationalism away from us or that people are not getting a chance to express themselves?

I don’t blame this conversion from manual to digital for making us lose interest in contemporary politics or in matters that affect the nation. What I believe is we as a generation have failed you. We haven’t been able to show you the path. We have treaded on a path and we know where it will take us. We should have imbibed that state in our children and we couldn’t do that.

I on my part have given a taste of history to both of my children. I have told them stories from day one to until now about how I have failed them, how I have changed, what I have become and how I feel now.

I have told them nothing should be dictated to you or come your way. You need to apply your judgement.

How did you reach to the point where you are right now in your life?

The state that I am right now is an accident. I did not want to become a cultural personality. I started my life in a liberated country, I had my own ideas, I had my own belief and I never had to get away from what I wanted to be.

Majority of people believe in a life which has been predetermined by God, I believe that you can make your own fate and walk along a path which you have made.

You have acted on stage theatres, television dramas and films. Which one did you like to work in the most?

Theatre was my favourite and I have no shred of doubt about it. I have never actually enjoyed television shooting than when I am on stage in front of the audience giving my lines. I love that feeling and it is very inspiring.

I still remember a line from Macbeth --- “To be thus is nothing but to be safely thus?”--- and after saying this he puts the crown on his head and you can feel Macbeth get transposed. The feeling that I got when I delivered this dialogue was very enthralling.

The state of our theatres has not improved in the past few decades. The audience number has always been dwindling. How do you think that this can be changed?

Take London, New York or Paris or any other theatre-wise advanced place around the world. You will see that the audience for stage drama is always the smallest than any other media. Even if it is the Royal Shakespeare Company, the audience will always be small in comparison with the television, cinema halls and other entertainment sources.

I was taken to see ‘The Tempest’ at the national theatre at Stratford upon Avon where Shakespeare was born. There were only twenty six people along with me there. And, most of them were from America and were rich enough to buy a ticket worth one hundred dollars. This says that theatre is always a bit different.

To be interested in stage theatre is quite different than movie theatres and television. The view remains constant and a big part of it is left to the imagination of the audience. To make theatre attractive to a band of audience through stagecraft and dialogue delivery is a tough job. It requires a lot of attention and has scope for interpretation. Also, the audience has a sweet spot for apparent attractions like CGI, special effects and other sorts of appealing matters like those. This is the reason for theatres to slowly become unfilled.

People are now getting more into drama making for the internet rather than the television and as a result the colloquial and local dialect like Barishal, Dhaka and Noakhali has infiltrated the screens. Do you think this has a derogatory effect on the television these days?

I personally believe that it does have adverse effects and the whole premise of it is wrong. It is not the case that if the dialogues are delivered in local dialect then the people will have more attraction.

One hundred years ago there were Jatras taking place in the villages and towns. Those were done using proper Bengali language. Still now, the little Jatra that does take place people use formal Bengali language in the dialogues. At that time the major audience of Jatras were boatmen, farmers, day labourers and other people from various walks of life like them and still they understood.

So, the way of speaking Bangla never hindered the growth of audience or the understanding of the audience. Rather, there are a number of dialects here in Bangladesh which needs to be translated to formal Bengali for others to understand.

The impact of You Tube has had an adverse effect on a personal level in the family. People have now become more detached from other family members. What is the reason behind it?

This is due to the lack of quality scripts and stories. Take ‘Aj Robibar’ for example, it was shown on BTV and I worked in it. That was written by Humayun Ahmed and people like him are born a dime a dozen.

The number of stories where people will take something home after watching has become very low.

We are always in the middle of conducting experiments. People of one time always look to the future for inspiration and writing something. But, experiment cannot be the truth; it is a way to find the truth that every director, film maker is searching for. But it is not the truth by itself. May be, that is the reason for younger generations are akin to do experiments.

Suppose, the story which has been told on the television twenty years ago, the story is actually much older. The reason why Humayun Ahmed, Sarat Chandra Chattopadhyay, Tara Sankar Bandyopadhyay are so popular because they were able to present stories which didn’t reflect the images of regular life.

People don’t want to see their reflection rather they want a moment in their life when they will feel something different after watching a drama or film.

Nowadays, people experience an incident on the roadside and they will write a story about it and make it into a drama. That’s why there is a huge difference between the 70s, 80s dramas to what is being shown now.

Share a few word of encouragement to the youngsters of the television and film industry.

I have a saying which I say to all young people who seek my advice --- “Not in the apparentness rather try to know the depth of life only then you will know life and once you know what life is no matter what you do, your future will be beautiful.”

I believe that the young generation should not be told anything; they don’t need directing or dictated. Nobody told me anything about what I should or should not do. What they can be told is that this is my experience and now you have to go and find your own experience. 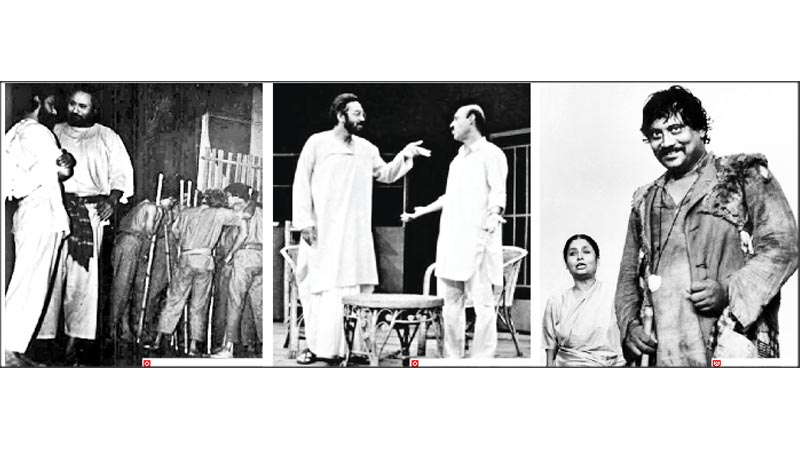 One mt oil to be transferred out of Belarus

Boeing wants it to fly, but travelers fear the 737 MAX

Ukraine has 15.9 bcm of gas in storage so far for winter