I am very excited about what I have seen: Domingo

Bangladesh coach Russell Domingo has said he is impressed by the performances of the fast bowlers in the BCB President’s Cup, a tournament which he has classified as just a part of players' easing into competitive cricket, and not something from which big assumptions can be drawn, reports Cricinfo.

“I am very excited about what I have seen,” Domingo said in a press conference on Thursday. “You look at the way Taskin bowls. Every international team in white-ball cricket has a fast bowler that they call on, when they need a wicket. England calls Jofra Archer, South Africa calls Rabada, Australia calls Mitchell Starc and India calls Bumrah. It is great to see that we have some options now that when the game is tight we can call on someone to bowl quickly. Someone like Taskin Ahmed and Khaled to bounce one or two guys out.

“It is very pleasing for me. If we take one thing out of this one-day tournament, [it] is the performance of the fast bowlers. The media and public should be excited by that as we don’t want to be a one-dimensional side, especially when we go away from home. If they are making the life of the batsmen hard, I am excited. That’s okay. To win games, you have to take 10 or 20 wickets.” 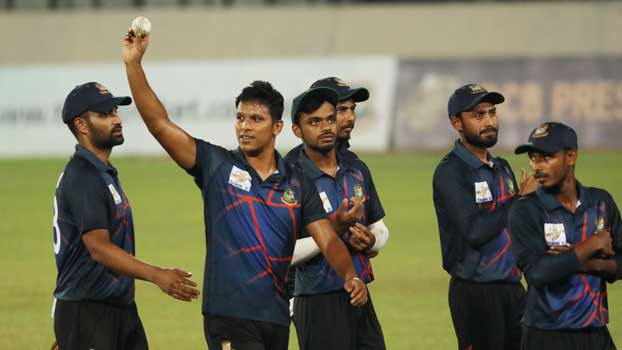 Domingo said quicks like Taskin, Rubel Hossain and Khaled have made most of the pandemic-induced break to work on themselves.

“I can’t compliment the players enough for the work they have done in the last six or seven weeks. Look at the shape of Taskin and how Rubel is going, and Khaled who came back from a big injury; the guys have really worked hard on their fitness levels. We are trying to improve their skills and make sure that they can perform at international level.

“The biggest thing Taskin has done is change his work ethic. He is working so much harder. He is in a very good physical condition. He can bowl more than one or two spells. His comeback spells are also quick, so that’s very pleasing for us. We are pushing hard to make sure guys are bowling at good pace at 5pm and at 10am,” he said.

Domingo was also full of praise for Shoriful Islam, the young left-arm quick who starred in Bangladesh’s Under-19 World Cup campaign earlier this year.

“He has got some work to do and has to be taught to get the ball to swing back into the left-hander. He has some good pace and bounce and a good attitude. He is impressive. He is always smiling and wanting to learn, which are good attributes for a young fast bowler. He took a great catch yesterday [against Najmul XI in the BCB President’s Cup]. He is a confident young man, and it is always good to have left-arm seamers available.”

“You have to remember that the guys haven’t played cricket for seven months, which is a long time without competitive cricket,” Domingo said. “There’s no doubt that the guys will get better. They will play together as a unit.

The BCB President’s Cup final, to be played between Mahmudullah XI and Najmul Hossain XI, which was due to be played on October 23, is shifted to October 25 due to inclement weather in Dhaka.

Morgan powers England to 397 against Afghans