The government plans to earmark the highest allocation for the Local Government and Rural Development and Cooperatives Ministry in the upcoming Annual Development Programme (ADP). The Planning Ministry has drafted a Tk 2,02700-crore ADP for the fiscal 2019-20, an increase of Tk 20,800 crore from the revised ADP. The ministry has given energy sector the second priority followed by the transport sector, sources said.

To implement Prime Minister Sheikh Hasina's development vision 2021, the government has targeted to developing urban facilities across the country, seeking to fulfil Awami League’s electoral promise. The draft ADP for fiscal 2019-20 has gone up by 31.38 per cent over the Revised Annual Development Programme (RADP) in the current year. The ministry has increased the allocation in the project assistance to implement the mega project smoothly, the sources said.

The ministry has drafted a Tk 71,800 crore ADP as the project assistance to speed up the ongoing mega projects. “We have drafted Annual Development Programme (ADP) for the fiscal year 2019-20. We have given the highest allocations in the Local Government and Rural and Cooperatives ministry. We have also given priority for allocating more in implementing the mega projects along with other development projects,” a senior official of the Planning Ministry told Bangladesh Post. 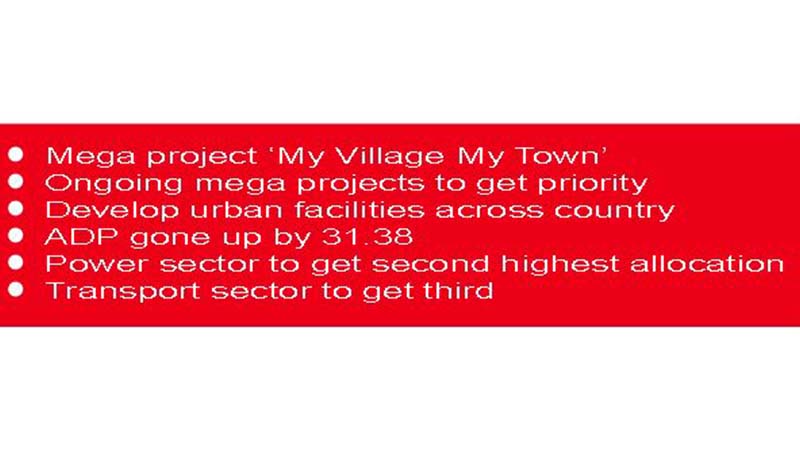 The government is giving more importance to implementing the ongoing development projects including some mega projects, the official said, adding that the ministry has listed 256 projects for getting foreign assistance in the upcoming ADP. Sources of Economic Relations Division (ERD) said the government will give priority of implementing fast-track projects on time: the much-awaited Padma Multipurpose Bridge, Metro Rail Service (Uttara to Agargoan), Rooppur Nuclear Power Plant, Matarbari Coal Power.

The government has undertaken a mega project “My Village, My Town” in a bid to provide every village with urban facilities which will get the big allocation in the upcoming budget. As per the ruling Awami League’s promise in its election manifesto, initiatives have been taken to ensure facilities including improved road communication, safe drinking water, modern healthcare and proper treatment, standard education, developed sewerage and waste management, increasing electricity and fuel supply, computer and high speed internet facilities, electrical equipment and standard consumer goods.

This project has been taken up to reduce pressure on the already crowded capital and other metropolitan cities and district towns. “Based on priority, we are working on the project as it is the ruling party’s electoral commitment. “As per Prime Minister’s directive, the Finance Ministry is set to give a huge allocation in the next budget,” a senior official of the Ministry said.

The government is likely to place the national budget for the fiscal 2019-20 on June 13 which will be of the size of Tk 5, 23, 190 crore for the next fiscal. The budget will ensure a congenial education atmosphere for children, fresh drinking water and sanitation in villages and infrastructures will be built for sports and recreation. Besides, mills and factories will be built at district and upazila levels to create job opportunities while internet coverage and information technology facilities will reach all over the country.

Man held with pistol in Bancharampur

Govt urges not to get confused about social media posts