Environmental organisations have blamed the Forest Department for playing the dysfunctional role in stopping the killing of wild animals. The organisations have placed an eight-point demand to save the forest and wildlife animals, including elephants.

They placed the demands from a daylong sit-in and cultural protest programme held in front of the Bon Bhaban (office of the Forest Department) at Agargaon in Dhaka on Sunday (November 28).

A total of 33 environmental organisations took part in the movement under the banner ‘Bangladesh Nature Conservation Alliance (BNCA)’. Many other individuals also expressed solidarity with the movement.

The united platform launched the movement protesting the failure of the authorities concerned as well as the Forest Department in stopping deforestation and killing of wild animals. 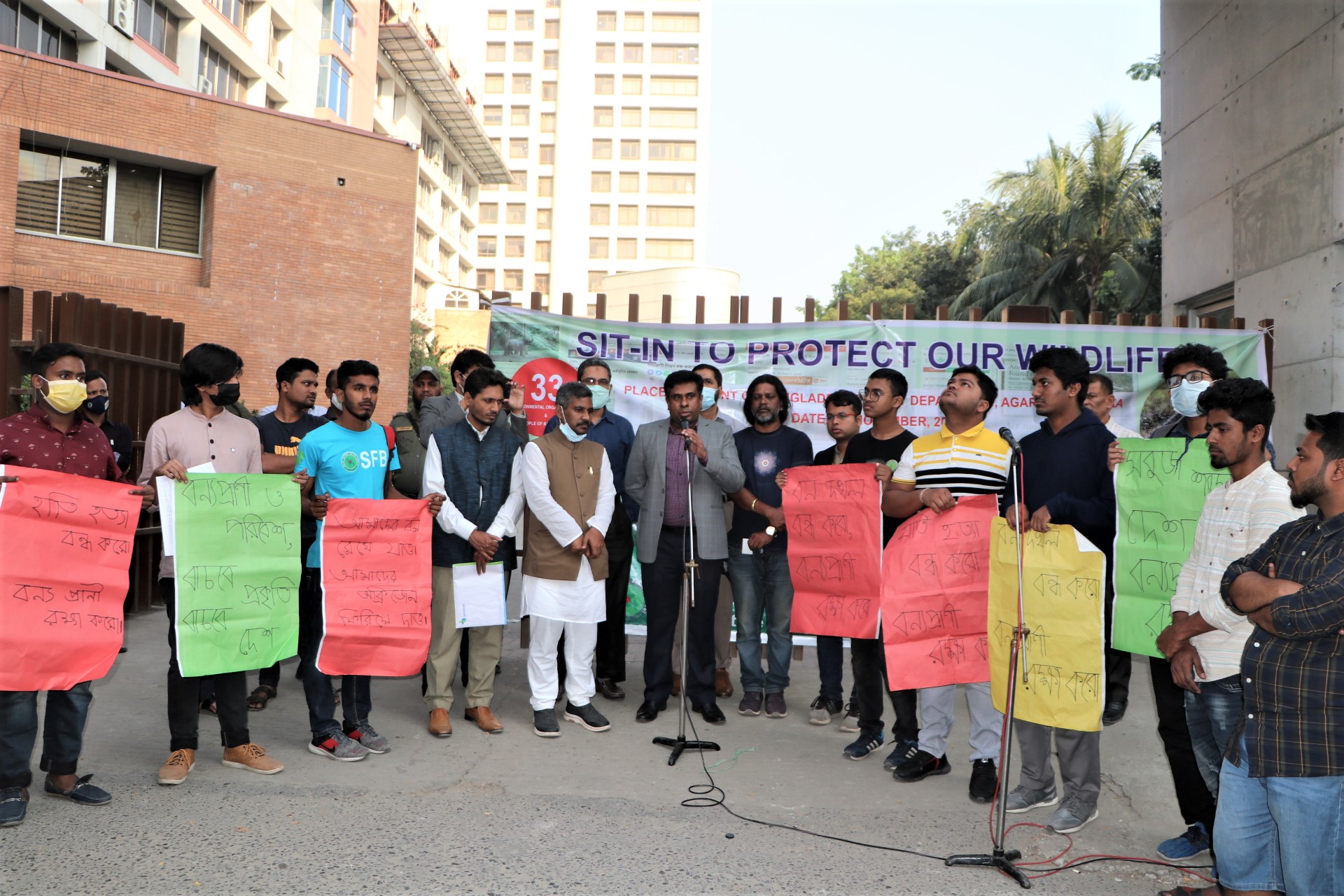 Bangladesh Nature Conservation Alliance (BNCA) arranged a daylong sit-in programme in front of the Bon Bhaban at Agargaon in Dhaka on Sunday to express non-confidence to Forest Department for its failure in stopping deforestation and killing of wild animals. During the daylong programme, various events, including human chain, songs, recitation, acting and elephant painting were held in front of the office of the Forest Department to express non-confidence to the department and also to create public awareness on wildlife conservation.

However, a delegation of the BNCA submitted the no-confidence motion to the Forest Department during the programme. Beginning at about 9:00 am, the daylong programme ended at about 5:00 pm through painting exhibition.

The eight-point demand of the Bangladesh Nature Conservation Alliance (BNCA) includes- formation of a probe body by experts to investigate the incidents of elephant killings and bring the culprits under punishment after identifying them; the elephant habitat must be brought back through evicting the occupants from the elephant corridor; formation of a neutral national commission with the people concerned to protect the country’s forests and wildlife animals; no more allotment of forest land for new development projects; all existing laws relating to forest and wildlife must be modified to incorporate the provisions for the responsibilities and duties of the forest department and ensure accountability of the forest officials; enactment of forest policy which will play vital role in stopping the commercial establishments in the forest; every wildlife-related crime should be investigated neutrally and the role of the forest department should be made clear to all; and taking effective steps to implement SDG-14 and 15.

In his presidential speech, Dr Kamruzzaman Majumder said, “We are concerned over the recent incidents of wildlife killings and deforestation. We called upon the Forest Department to realize our demands in the interest of the country.” 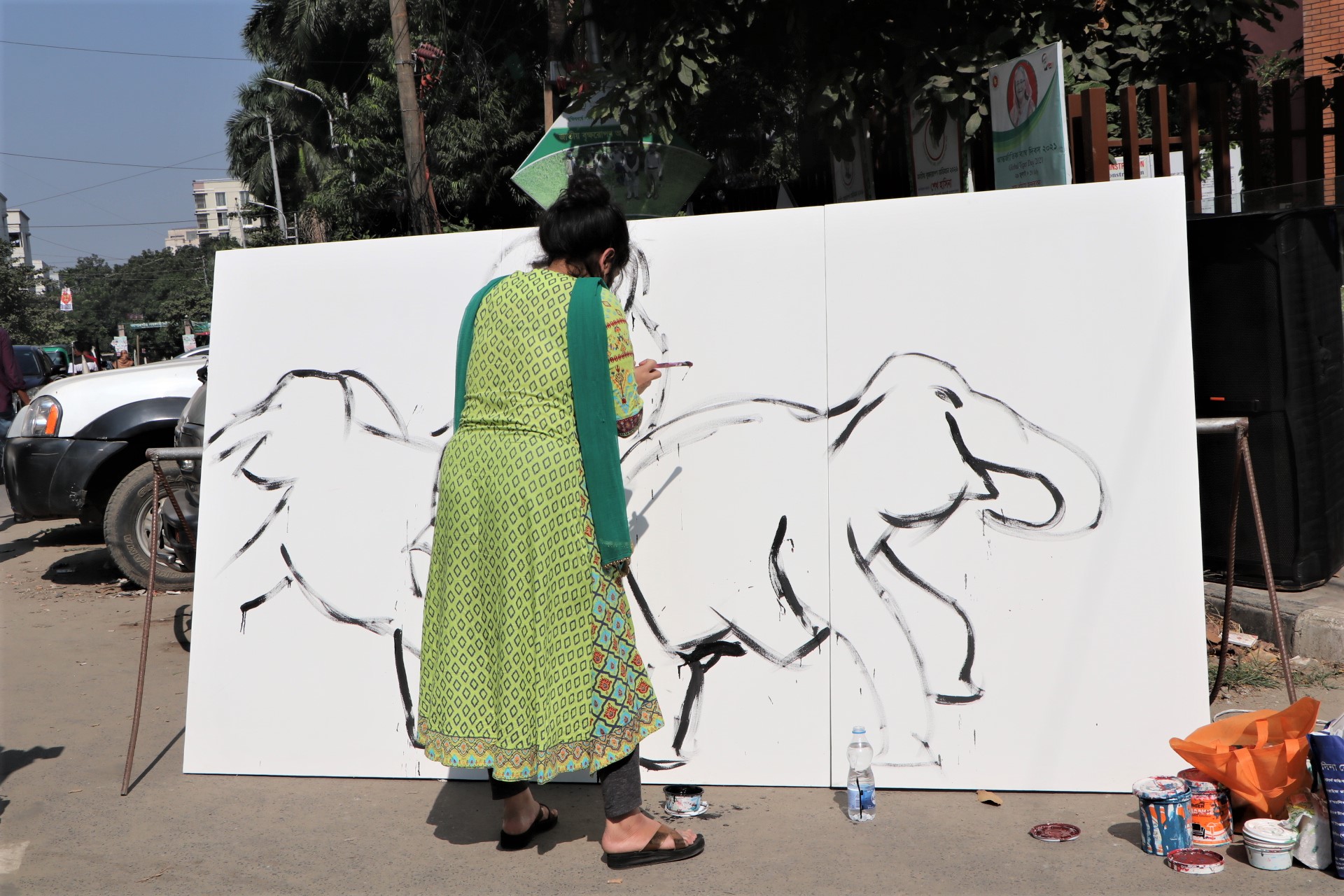 An environmental activist is seen working on an elephant painting during a daylong sit-in programme in front of the Bon Bhaban at Agargaon in Dhaka on Sunday which was arranged protesting deforestation and killing of wild animals, including elephant.

Forest ranger (administration and finance) of the Forest Department Hossain Mohammad Nishad also expressed solidarity with the programme. He said, “We will take necessary action. We will further increase our efforts in forest and wildlife conservation. We will work together for making awareness.”

Be vocal against anti-national conspirators abroad

‘Discretionary power of land officers to be reduced’

NCC poll will be fair, neutral and peaceful: Agriculture Minister