Education Minister Dr Dipu Moni has won the Gusi Peace Prize for her “exemplary achievements” in the field of “public service and diplomacy”.

She received the prize in Manila on Thursday.

The Gusi Peace Prize is given by the Gusi Peace Prize Foundation, based in Manila, Philippines, mandated by the Presidential Proclamation No. 1476. It is given to recognize individuals and organizations who contribute to global peace and progress through a wide variety of fields. 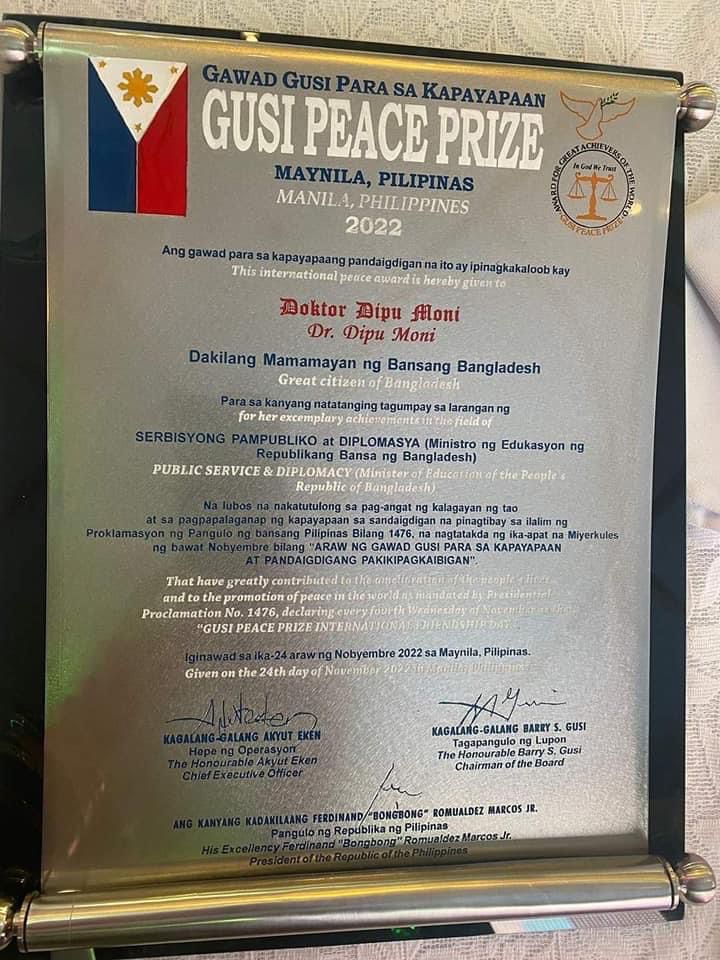 Dipu Moni has been the Education Minister of Bangladesh since January 2019 and a Member of Parliament representing the Chandpur-3 constituency since 2009. She was the first female Foreign Minister of Bangladesh from 2009 to 2013. She was also the Chairperson of the Parliamentary Standing Committee on the Ministry of Foreign Affairs and the All Party Parliamentary Standing Committee on Human Rights between 2014 and 2018.

Her father MA Wadud, a close associate of the Father of the Nation Bangabandhu Sheikh Mujibur Rahman, was a founding member of the Bangladesh Awami League, first Council elected General Secretary of Students League and known especially for his role in the Language Movement in 1952.

She is the wife of Tawfique Nawaz, an Oxford educated Senior Advocate of the country and mother to their two children Tawquir Rashaad Nawaz and Tani Deepavali Nawaz.

On receiving the award, in her brief speech she spoke about the need for education for building a peaceful world and quoted Prime Minister Sheikh Hasina saying, “Education and only education will determine the future shape of humanity”.

“Let us inspire the new generation, imbibe empathy, tolerance, respect for others, caring for people and environment and build a world of peace," she added.