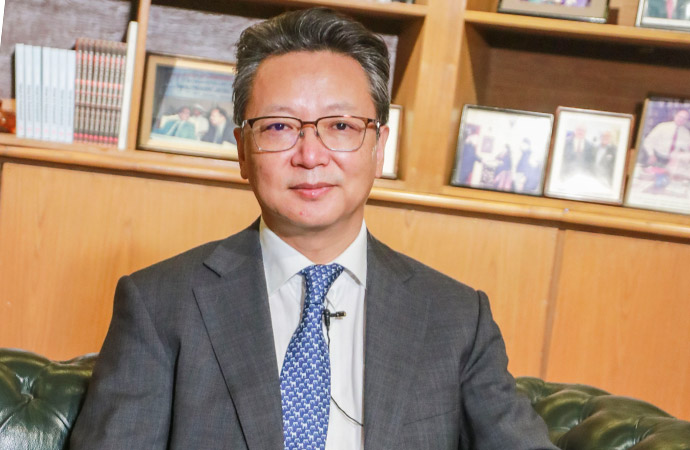 Though Covid-19 outbreak poses serious challenges to the world economy, China has been restoring faster than what was expected. The coordinated efforts made by China in pandemic control and socioeconomic development delivered notable results with the national economy gradually recovering in the first half of 2020. According to the latest data from the National Bureau of Statistics, China’s gross domestic product (GDP) expanded 3.2 percent year-on-year in the second quarter of the year, reversing from a 6.8-percent contraction in the first quarter. That means, the national economy shifted from slowing down to rising with economic growth in the second quarter changing from negative to positive and main indicators showing restorative growth. As the national economy recovers gradually, the basic livelihood is ensured effectively, market expectation is on the positive side, and the overall social development remains stable.

China has become the first major economy to return to positive growth since the Covid-19 started sweeping across the world earlier this year. What makes China take the lead in the economic recovery? The answer is three-fold.

Firstly, China took efficient and effective steps to advance pandemic control and economic development in parallel under the strong leadership of the Central Committee of the Communist Party of China with Comrade Xi Jinping at the core. In the past few months, the resumption of work, production, business and market was advanced at an accelerated pace. The government has been making a strong push to ensure “six priorities” and “six stabilities” for steady economic momentum, with a key focus on creating jobs, using policy tools, expanding domestic demand, resuming work and production, deepening reforms and opening-up. The series of government measures provided a solid foundation for the economic recovery.

Secondly, the Chinese economy has shown great resilience and enormous potential during the outbreak. The fundamentals of the Chinese economy remain strong. It further proves that the basic trend of the Chinese economy of maintaining steady growth towards long-term sound development remains unchanged. China’s solid material foundation, abundant human resources and vast market potential will continue to provide a sound basis and condition for sustained economic growth. The gap between the eastern and western regions, and between the urban and rural areas of China, indicates ample spaces and untapped potential for further development. China’s fiscal deficit and government debt is also secure and much lower than that of the other major economies like the US, Europe and Japan, leaving enough room for further positive regulation. Moreover, during the pandemic outbreak, emerging business models, industries and technologies, such as "stay-home" economy, digital economy, medical care and Fintech, have shown enormous potential and vitality, which are generating strong driving forces for economic growth.

Thirdly, China remains committed to reform and opening up, and to building an open world economy. Measures are and will continuously be taken to ease market access, expand import and increase outbound investment. In the first half of 2020, China accelerated the establishment of Hainan free trade port, held the online 127 China Import and Export Fair successfully, shortened the negative list for foreign investment by a big margin and prepared for the third China International Import Expo in an orderly manner. These efforts represent China's confidence in opening its market wider to the world even at this unusual time, and could also help boost the economy out of recession.

Since the outbreak of the pandemic, Bangladesh has taken strong preventive measures against it and rolled out the economic stimulus package under the leadership of Prime Minster Sheikh Hasina, which have also achieved intended results. Although the pandemic has caused difficulties to the economic development of Bangladesh, and also resulted in decline in bilateral trade between China and Bangladesh and the slowdown of the progress of some cooperation projects, those difficulties can be addressed in the long run. According to the latest forecasts by the World Bank and the International Monetary Fund, the GDP growth rate of Bangladesh in 2020-21 fiscal year is still expected to reach 2-3 percent. Since Bangladesh remains one of the most dynamic economies in South Asia and the world, as well as China’s indispensable partner in South Asia, China strongly believes that our two countries will still enjoy great potential for economic and trade cooperation. During the telephone conversations between President Xi and Prime Minister Sheikh Hasina on 20 May, it was reiterated that our two countries are each other’s important partners for development, and it was imperative that the two countries enhance strategic partnership of cooperation. In face of the severe challenge of the pandemic, it is my hope that China and the Bangladesh will seize the opportunities before us and take the initiative to translate confidence into driving forces for cooperation and deliver more outcomes. Here I have a few suggestions that I would like to share with Bangladeshi friends from government and businesses.

Firstly, China and Bangladesh should continue to exchange experiences and coordinate policies. Now China is taking the lead in bringing economic activities back on track. In this process, China has accumulated useful experience. As Bangladesh is also gradually easing the lockdown and restoring its economy, our two countries could share relevant experiences, work together to support enterprises to turn crisis into opportunities, foster the gradual resumption of key cooperation projects and maintain the stability of the industrial and supply chains. This will lay a solid foundation for us to ramp up cooperation in various fields in the post-COVID-19 era.

Secondly, China and Bangladesh should continue to strengthen development strategy coordination and fully exploit the potential of cooperation in various fields. Taking the implementation of 97 percent zero-tariff treatment as a new starting point, we can actively explore the possibility of signing a free trade agreement, like the one between China and Cambodia that just finished negotiations and about to sign, to further support more movements of goods and production factors between our two countries. Meanwhile, we hope that Bangladesh will continue to improve the investment environment to attract more Chinese investors. In addition, we can expand cooperation in infrastructure, energy, transportation, ICT and agriculture, and promote practical cooperation in other new areas, such as maritime, water conservancy, science and technology.

Thirdly, China and Bangladesh should continue to firmly support multilateralism and safeguard free trade to promote the recovery and steady growth of the world economy. Both China and Bangladesh are important participants and beneficiaries of economic globalisation and trade liberalisation. At this unusual time, it is all the more important that our two countries join hands to firmly oppose unilateralism and trade protectionism, so that we can make contributions to the establishment of an equal, inclusive and mutually respectful international economic and trade system.

Difficulties and hardship will pass as we go ahead along. I am confident that as long as China and Bangladesh strengthen confidence and enhance cooperation, we will turn the crisis into opportunities and turn the opportunities into new success. Together, we will deliver more business outcomes that benefit both our peoples! Together, we will infuse more positive energy into the steady and sustained development of China-Bangladesh strategic partnership of cooperation!

The writer is the Ambassador of China to Bangladesh

Anxiety is the mood of our time

This is how Brexit is going thus far

Transparency and accountability required for public expenditure in health sector

My brief encounter with history

India’s soft power as a pillar of foreign policy

No room for anti-state conspiracy