Bring back Bangladeshis willing to return from China: PM

Prime Minister Sheikh Hasina has directed the authorities concerned to take immediate steps to bring back ‘willing to return’ Bangladeshis who are now stranded in China due to outbreak of deadly coronavirus.

State Minister for Foreign Affairs M Shahriar Alam revealed the information in a Facebook post on Monday.
“We’ve started discussions with the Chinese government in this regard,” he said in the post adding that it would be decided through discussion with local administration in China and with their consent on how this will be done.

“I have already started discussion with the Chinese government in this regard,” he wrote in the post adding, “Our main purpose is the safety of our citizens.” 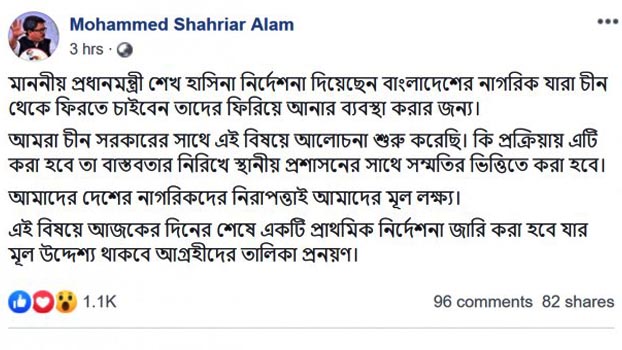 “Our main target is to ensure security of the citizens of our country,” the state minister said.
A preliminary instruction will be issued later in the day over preparing a list of the Bangladeshi nationals willing to return from China.
Bangladesh Embassy in Beijing has already opened a 24-hour hotline to reach out expatriate Bangladeshis if they need any emergency support due to the virus.

The hotline number is +86 178-0111-6005 and it has been circulated to Bangladeshi expatriates, especially students and researchers residing across the China.
Persons stranded in China’s Wuhan city, the epicentre of the Coronavirus outbreak that has claimed 80 lives so far, or elsewhere in China have been requested to contact the authorities in case of any emergency.

Mentioning that there are about 300 to 400 Bangladeshi students are now in Wuhan, the epicenter of the virus, the Bangladesh embassy earlier said the mission in Beijing is in touch with them.

Earlier, Bangladeshi students under lockdown in Wuhan appealed for help through social media, saying they want to return to Bangladesh.

The Bangladesh Embassy in Beijing then said it has established contact with the ministry of foreign affairs in China in case emergency support was needed by Bangladeshi expatriates in Wuhan. According to a press release, there has been no news of any foreigner being infected by or dying from the coronavirus.

Car prices must come down

VAT to be revenue collection thrust

83 held during anti-narcotics drive in Rajshahi