A friendly in name only, the 111th meeting between the two heavyweights will take place in the unfamiliar surroundings of the King Saud University Stadium in Saudi Arabia, report agencies.

A fixture like this needs no extra hype, but the return of Argentina talisman and all-time record goalscorer Lionel Messi following a three-month ban only adds to the allure of such a glamour showdown.

The Barcelona captain has missed La Albiceleste's last four games as a result of the suspension, which he received after accusing CONMEBOL of corruption during this summer's Copa America - a tournament Brazil went on to win after beating Argentina in the semi-finals.

Messi's comments came in the wake of a frankly farcical red card in the third-place playoff of that tournament, but Argentina went on to beat Chile 2-1 in that match and have continued to flourish in the absence of their main man.

Indeed, Lionel Scaloni's side go into Friday's showdown on a five-match unbeaten streak - their longest for two years - and having hammered Ecuador 6-1 in their most recent outing last month.

It has been an impressive response to what was a largely underwhelming Copa America tournament, despite finishing in third place, whereas

Brazil have seemingly suffered the opposite fortunes and are without a win since lifting the continental crown in July.

Tite's side have drawn three and lost one of their four outings since beating Peru in the final, with their most recent two seeing them held to a 1-1 stalemate by both Senegal and Nigeria last month.

The Selecao have not been on a longer winless streak since a run of five draws on the bounce between November 2003 and May 2004, although on that occasion it was a 3-1 triumph over Argentina which got them back to winning ways.

It has made for a rather disappointing end to a year which was otherwise hugely successful as Brazil picked up their first major international trophy since 2007, although the subsequent friendly results will pale into insignificance next to that achievement throughout the years. 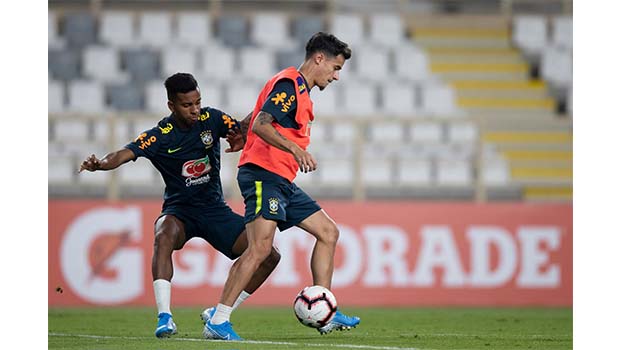 The scale of their struggles should also be kept in context; Brazil have still won 14 and lost just one of their 20 matches since the World Cup and, according to the FIFA rankings, remain the third best national team in the world.

Nonetheless, few teams are as demanding of themselves as the five-time world champions, and a victory over their greatest rivals would be the perfect way to get back on the winning trail.

Whereas Argentina have their talisman back in Messi, Brazil are missing theirs. Neymar is still sidelined after suffering a hamstring injury in the last international break, leaving him stranded still one goal behind Ronaldo in the all-time Brazil list for now.

Manchester City goalkeeper Ederson and Ajax forward David Neres have also been forced to pull out of the squad through injury, while there is no place for Dani Alves, Marcelo, Fernandinho, Vinicius Junior, Everton Soares or Douglas Costa.

Real Madrid starlet Rodrygo has been included following his Champions League hat-trick earlier this month, and he is one of six uncapped players in the squad, including Aston Villa duo Douglas Luiz and Wesley.

In addition to welcoming Messi back into the fold, Scaloni has also handed an international recall to Manchester City striker Sergio Aguero, who has not featured for his country since the Copa America.

The 31-year-old will have his work cut out dislodging the in-form Lautaro Martinez, though, with the Inter Milan forward having scored nine goals in 15 games for his country and eight in 16 at club level this season.

Paulo Dybala is another option in a star-studded attacking lineup, while Giovani Lo Celso, Nicolas Otamendi and Marcos Rojo are among the Premier League players at Scaloni's disposal. There is surprisingly no place for Angel di Maria despite his sparkling form for Paris Saint-Germain, while teammate Mauro Icardi is also once again excluded.

He earned right to decide his future: Strauss on Morgan

Pochettino tells Spurs to stay together after Bayern humiliation

Mourinho would not swap Spurs for any club now