Begum Mujib: Her contribution to nation-building and beyond

If by Father of the Nation we mean Bangabandhu Sheikh Mujib, then Begum Fazilatunnessa Mujib is obviously the mother. It is not because that she is Begum Mujib, not because she became the first lady, but because of her personal contribution to the nation and love for the people that made her Bangamata. Her dedication to the nation was so glorious that Bangamata is the appropriate appreciation for her. The lady whose identity is simplicity, commonness, patience, sagacity, feeling for others should not be regarded as a mere housewife and her sacrifice for the nation being the life partner of Sheikh Mujib, the greatest son of the Bengal, was so divergent that as a homemaker she was ideal and as a political leader if not global but certainly national.

Hundreds of thousands of people who came in contact with her never forget her because of her love for them. ‘Bhabi’, the wife of elder brother, was the genuine term used by millions of followers of Sheikh Mujib who used to address Sheikh Mujib as Mujib Bhai. There was a time during 1948 to 1958 when by ‘Mujib Bhai’, people used to mean Bangabandhu alone although there were thousands of people whose names were Mujibur.

The prefix ‘Sheikh’ was used to refer to him alone. So, Fazilatunnessa Mujib became the ‘Bhabi’ of millions of supporters of Bangabandhu even during the sixties. Owing to the fact that Sheikh Mujib had to spend about 13 years in jail, the responsibility of running day to day political affairs fell on her shoulder and she did it most successfully as an able leader. She did never come out from her house to shout on the road or did present her in open public places. Rather being an inmate of her homeland house, she made it a point to discuss political issues with the followers of Bangabandhu and advised them and even solved their problems even if it was a personal one. 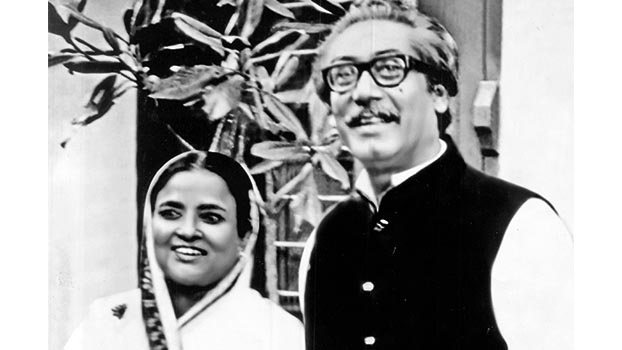 What education in general means in our country was not acquired by her. But she was illuminated in real sense of the term. Her capability to advise the party workers and the control of their movements was so correct that even Bangabandhu, when out of prison, had to admit her wisdom. She was self-educated. She was a lady of uncommon intelligence and wit. Sometimes she talked in a way that easily induced one to laughter.

Her witty words were source of pleasure for many. She used to talk slowly and listen to others very patiently. She used to treat the members of the house with kindness. If you ask any of them like Roma, Abdul who are still alive, you will find them shedding tears while talking about Bangabandhu. She was really a mother for many and finally mother of the nation.  I had the opportunity to be at their residence when they were at 14, Abdul

Gani Road as minister and when Bangabandhu was the chairman of Tea Board at Shegun Bagicha and when he was the Managing Director of Alfa Insurance Co at Dinfa building at Bangabandhu Avenue, the then Jinnah Avenue. How many times did I visit their house at road 32 of Dhanmondi I cannot remember? Even I had to go to Bangabandhu’s house sometimes more than once a day as a physician and also as a political worker of Awami League. The way that great lady treated me is just unforgettable. She was more than a mother.

She had special feelings for the poor and her relatives. She helped them when required. I have seen in a number of occasions that she is paying money to the workers who came from the remote areas of the country and had no money for the return journey. Besides, she donated among the poor workers and relatives during festivals like Eid and paid money for education of their children.

The question today is to what extent she was related to the party politics and if so, what kind of job she had been doing all through? Begum Mujib had to look after families of those political workers who had been imprisoned for a long time. She used to advise the workers out of her own wisdom and sagacity in times of necessity. She was in close touch with the workers and she had the experience to guide them. She used to provide them with fund collected even by selling her ornaments. In fact, her political sagacity reached such a level that she used to guide workers and leaders in times of crisis.

Begum Fazilatunnessa Mujib was found to be very active when Bangabandhu was in prison. She contacted the political workers and inquired about their welfare during every phase of movements. She inspired them to continue the movement. Many committees of student movement were formed at the suggestion of Begum Mujib. She even used to advise them how to conduct the movements. Almost all student leaders had personal acquaintance with her. In absence of Bangabandhu she was the leader. In this way she virtually became the shadow leader of the party.

Finally, the management of the family in absence of Bangabandhu was extraordinarily good. During her long 23 years arduous struggle Bangabandhu was arrested frequently and he had to stay in prison for nearly 14 years. Bangamata had to manage everything i.e., education of the children, family expenditures and even political expenses. She used to lead a modest life with her children having no demands. In a number of occasions Bangabandhu was found expressing gratitude to her. The lady who had been outstanding throughout her life was certainly an ideal one, a good wife and the best mother. What an ideal house it was where all members lived with joy!

There were many well-wishers of Bangabandhu’s family. Since 1954 Sheikh Naser, brother of Bangabandhu and a businessman of Khulna, used to look after the family of Bangabandhu although he was not associated with the party. Some close relatives of Bangabandhu were really helpful to them. Bangamata was so wise and prudent that she knew well how to fight with misery and face adversity.

The brutal killing of Bangabandhu is not unexplainable. Bangabandhu fought against the interest of imperialist forces to liberate the country. This force in connivance with the reactionary forces killed Bangabandhu. But why did they kill a gentle lady who had to suffer throughout her whole life? Mostly she had to pass her time in mental agony. Hardly was she ever at the care with her children of near and dear ones. In total Bangabandhu had been in power two years during Pakistan and three and a half years in independent Bangladesh. He did spend rest of life in awesome reality.

Bangamata as his associate had to bear the burden of the family. She suffered, suffered and suffered all through. The three and a half years of life as the first lady were really insignificant in comparison to her vast suffering throughout her whole life.

She will never come back but she will remain in the minds of many due to her dedication to the nation and love for the people. If Bangabandhu is remembered as the Father of the Nation, she is certainly to be remembered as the mother.

(Dr S A Malek is the former political adviser to the Prime Minister, a Member of Parliament, general secretary of Bangabandhu Parishad and a columnist.)