Amar Ekushey observed with due respect across country

The supreme sacrifice of the language heroes on this day 69 years back was remembered as the nation observed the Amar Ekushey and the International Mother Language Day by paying rich tributes to the martyrs on Sunday.

People in thousands thronged the Central Shaheed Minar in the capital and other Shaheed Minars across the country to pay their glowing tributes to the 1952 language martyrs by placing wreaths at the altar of the monuments.

The Language Movement, a significant event in the nation’s history, was aimed at establishing the right of mother tongue as well as protecting self-entity, culture and heritage.

Our Correspondents from different places of the country sent news items on the observance of the Amar Ekushey and the International Mother Language Day.

In Chattogram, people in the port city remembered those who sacrificed their lives for Bengali language. They paid rich tributes to them, reports out Staff Correspondent from Ctg.

Newly elected mayor of Chattogram City Corporation (CCC) Md Rezaul Karim Chowdhury paid homage to the language martyrs by laying a floral wreath at the Shaheed Minar in the Casside Road area of the city. 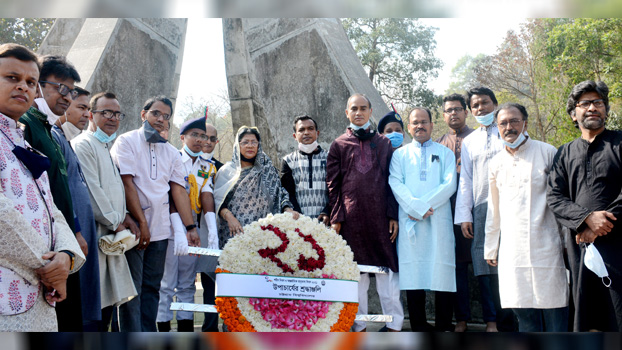 Vice-Chancellor of Chittagong University Prof Dr Shireen Akhter along with others paid rich tributes to the martyrs of Language Movement of 1952 by placing a wreath at the Central Shaheed Minar on the campus on Sunday marking the Amar Ekushey and the International Mother Language Day.

Thousands of people stood in the line towards the Shaheed Minar with flowers in their hands before the clock struck 12 AM in the middle of the night to pay their respects to the martyrs. The Shaheed Minar was opened after paying homage to eminent persons.

In Barishal, the Amar Ekushey and the International Mother Language Day-2021 was observed at Barishal University with due solemnity, reports our BU Correspondent. 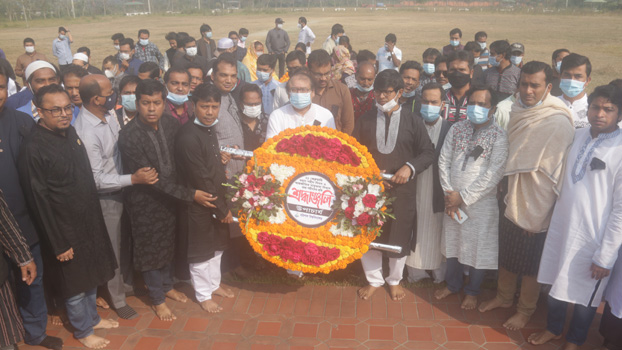 Vice-Chancellor of Barishal University Prof Dr Md Sadequl Arefin along with others paid homage to the language martyrs by laying a wreath at the Central Shaheed Minar on the campus on Sunday marking the Amar Ekushey.

On the occasion, the university family gathered at the Central Shaheed Minar on the campus with a mourning rally led by the Vice-Chancellor Prof Dr Md Sadequl Arefin and paid homage to the language martyrs by laying wreath.

In Narayanganj, the Amar Ekushey and the International Mother Language Day was observed in Narayanganj with due solem

On the occasion, people from all walks of life gathered at Central Shaheed Minar at Chashara in Narayanganj town with flowers in hand and paid rich tributes to langue martyrs. All five lawmakers and their representatives places wreaths at the Shaheed Minar at the clock struck 12.01 am.

In Tangail, the day was observed in the district like all over the country with humble respect and various programmes, reports our Tangail Correspondent. 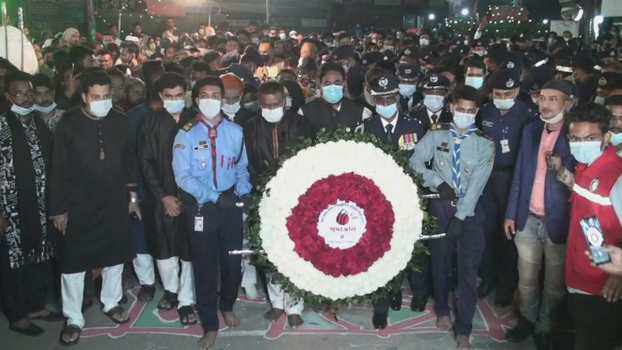 Like other parts of the country, the Amar Ekushey and the International Mother Language Day was observed in Tangail by placing wreaths at Shaheed Minar and other programmes.

In Noakhali, the authorities of Noakhali Science and Technology University (NSTU) have observed the day with various arrangements, including rally and placing wreath at the Central Shaheed Minar, reports our NSTU Correspondent.

In Kishoreganj, the day was observed in the district with due respect. The day’s programme began with the laying of wreaths at the Shaheed Minar in the early hours of February 21,  reports our Kishoreganj Correspondent. 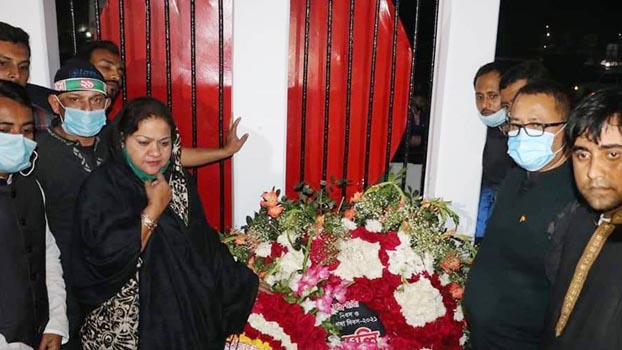 In the morning, wreaths were laid by schools, colleges, madrasas and other educational institutions. A special prayer meeting was organized in the mosque and temple for the peace of the souls of the martyrs.

In Magura, the day was observed in the district with due respect and holding various programmes, reports our Magura Correspondent. 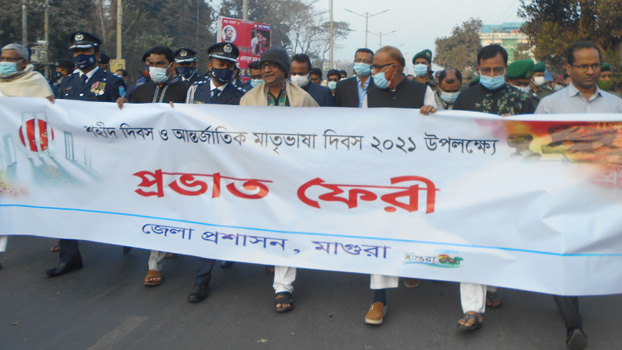 Magura district administration brought out a ‘Probhat Ferry’ in the district town on Sunday on the occasion of the Amar Ekushey and the International Mother Language Day.

Besides, many students took part in the voluntary blood donation programme on the same venue in collaboration with the District Red Crescent. Certificates and prizes were distributed among the students who participated in the discussion and various competitions at the District Children's Academy.

In Jhenaidah, the day was observed in Jhenaidah with due respect with various programmes. The day programme began with placing floral wreaths at Central Shaheed Minar at 12.01 am. 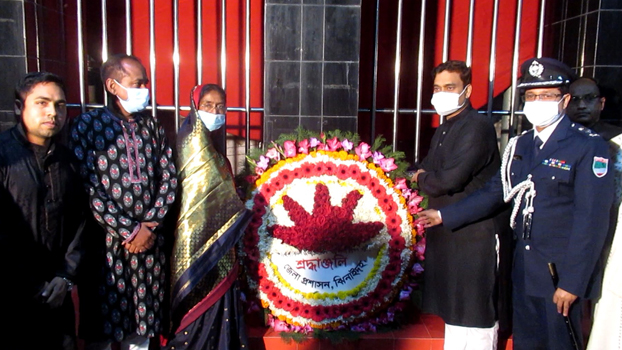 Jhenaidah district administration paid homage to the language martyrs by placing wreath at a Shaheed Minar in the district town on Sunday.

Festoons to inscribe with Bangla letters were set up on the main roads and Chuadanga Government College Shaheed Minar areas in the town.

In the morning, students of different schools and colleges brought out Provat Ferry (dawn rally).

Information Department of Chuadanga arranged showing different documentary deeds on Ekushey at different points of the town. Special monajats were offered by the direction of district administration at mosques, temples and churches.

A discussion meeting was held on Shilpakala Academy premises under the auspices of district administration. A dram named `Kobor’ was staged there. 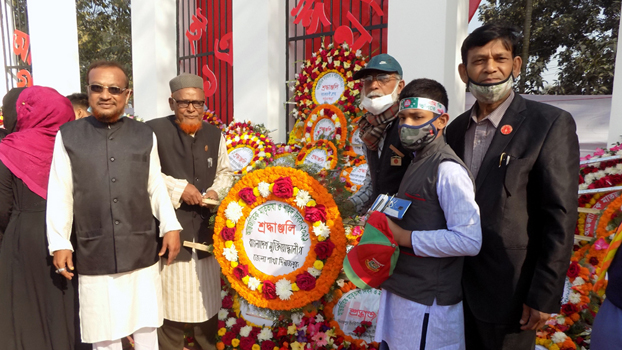 Leaders and workers of the organization and all the members were present at this time. The speakers said, we would like to pay our respects to those who sacrificed their lives for the mother tongue on this day and pray for the forgiveness of their souls. We have gained the ability to speak in our mother tongue due to their sacrifice.

General Secretary of the organization Md Azizul Haque Mandal was also present at the time along with other freedom fighters.

In Manikganj, people of Manikganj paid rich tribute to the Language Movement martyrs at Manikganj Central Shahid Minar with call to establish such a society where no man will exploit another, reports our Manikganj Correspondent 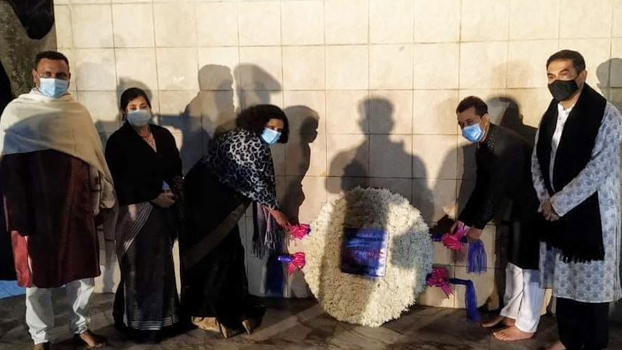 Deputy Commissioner (DC) of Manikganj SM Ferdous paid rich tributes to language martyrs by placing a wreath at the Central Shaheed Minar in Manikganj on Sunday marking the Amar Ekushey and the International Mother Language Day.

People from all walks of life were seen at the Central Shaheed Minar. The national flag was at half-mast all over the Manikganj and as well as the mournful immortal chorus ‘Amar Bhaiyer Rokte Rangano Ekushey February, Ami Ki Bhulite Pari’ was reverberated all around in memory of the language heroes.

District and Upazila Administration, Different political, socio-cultural and professional organisations have chalked out their respective multifarious programmes to observe the day in a befitting manner. Those included rallies, debate, discussion, recitation of poems, staging of drama, patriotic songs, sessions of dance and mass drama.

At 8.00am in the morning, a rally, organised by district administration, led by Deputy Commissioner Ferdous, was brought out from Central Shaheed Minar premises in the morning and it paraded the main roads of the town.

Later, in the afternoon, family members of Language Martyred Rafiq Uddin Ahammed were honored by the district administration. On this grand occasion, a discussion meeting was also held at Manikganj Govt High School Playground. They also organised another discussion meeting, cultural function and prize distribution to the competition winners at Manikganj.

Menwhile, thousands of people visited the house of Rafiq at ‘Rafique Nagar’ under Singair Upazila in Manikganj, where they pay homage to first Language Martyred Rafiq Uddin Ahammed at the Shahid Minar.

In Rajbari, extensive programmes were held by various governmental and non-governmental organizations marking the day, reports our Rajbari Correspondent.

People of Rajbari paid their respects to the martyrs of language movement at the central Shaheed Minar located at Shaheed Khushi Railway Maidan. The homage paying ceremony began at 12:01 am with the district administration paying tribute at the Shaheed Minar. Later, a team of police led by Superintendent of Police MM Shakiluzzaman paid their homage.

Later the Shaheed Minar was made open to the general public and the common people started paying homage from midnight.

At this time, several government and non-government organizations paid homage. Apart from this, the premises of Shaheed Minar became prominent by the presence of the students of various government, private, semi-government institutions and school-colleges.