Agra: The wonder city to enjoy

Some people prefer to stay in the comfort of their own home, while others have been bitten by the travel bug and can't wait to explore the world. Exotic places call them. "Come visit me and I will show you my mysteries," they say.

One such amazing place that you plan to visit to satiate your travel bug is Agra. With the history of the city dating back all the way to the Mahabharata, it is ensured that there is no shortage of experiences.

Once the capital and pride of the Mughal Empire, Agra serves as a priceless piece of the story of the history of India, and a visit to this city ensures that the influence of Mughal Emperors such as Akbar and Shah Jahan cannot be overlooked.

A town of particular importance between 1556 and 1658, Agra is home to three UNESCO World Heritage sites – the mini city of Fatehpur Sikri, one of the wonders of the world Taj Mahal and the magnificent Agra Fort.

Consistently littered by architectural marvels in red stone and white marble, Agra also boasts of an incredible food culture, and a variety of shopping areas that make the city the tourist haven that it is.

1 Home to one of the Seven Wonders of the World -

Only let this one teardrop, this Taj Mahal, glisten spotlessly bright on the cheek of time, forever and ever.” – Rabindranath Tagore.

What you don't see is my mouth wide open, staring up in wonder at the beautiful Taj Mahal. Some 20,000 workers spent twenty-two years constructing the glistening white Taj Mahal. Made entirely of marble, the structure was designed as a mausoleum for a favorite wife of the Mughal emperor Shah Jahan. Mughal architecture is characterized by harmony, balance, and geometry. Beautifully symmetrical, intricate calligraphy, inlaid flowers made of gemstones, and magnificent garden, each element of the Taj Mahal is independent, yet perfectly integrated with the structure as a whole. 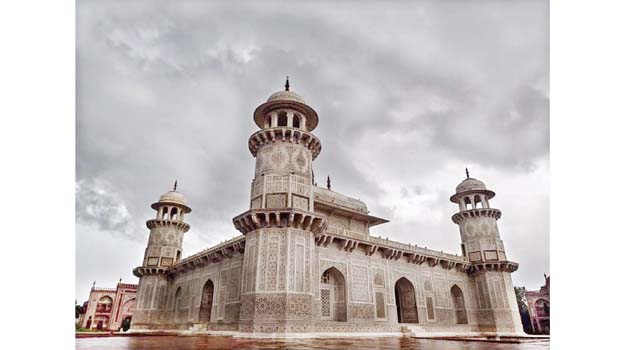 #2 Houses he most celebrated forts in the world –

Captured by the Mughals in 1526, Agra Fort is a vast treasure including the Koh-i-Noor diamond was seized. It took 4000 workers and eight years to build the fort and it was completed in 1573. Double ramparts with massive circular bastions encircle the 94-acre fort. Four gates on four sides provide access to the fort. Delhi Gate is the grandest and was the gate for king’s formal entry. Diwan-i-Am, Diwan-i-Khas and Jahangiri Mahal are must visits here. A visit to the fort is incomplete without a visit to Musamman Burj where Shah Jahan was held captive by Aurangazeb. The bastion offers the most poignant views of the Taj Mahal where Shah Jahan spent his last few moments of his life gazing at the beautiful piece of art.

A picturesque location that was chosen by Shah Jahan as the ideal viewing point for the Taj Mahal, the Mehtab Bagh was the eleventh, and last, Mughal Garden to be built. It lies on the banks of the Yamuna and is about 11 kilometres from the Taj Mahal. It provides an ethereal view of the spectacular monument, particularly in the nighttime, which is why it received its name, known as the ‘Moonlight Garden’. It is built in the typical ‘charbagh’ style that characterizes most Mughal constructions and is the same width as the Taj Mahal itself.

#4 Bears some of the best architecture in the world -

Named as the ‘Baby Taj’, Itimad-ud-Daulah is considered the inspiration for Taj Mahal. However, the tomb of Itimad-Ud-Daulah is a more delicate artwork with marble lattice screens and fine carvings. This is the first Mughal structure made with marbles by Nur Jahan, mother of Shah Jahan

The monument serves as one of the most unusual examples of Mughal architecture amongst the places to see near Agra, particularly the un-proportional dome style.

#5 No shortage of delicious dishes to enjoy -

While famous for its history and architecture, Agra is also a culturally rich location, which would be incomplete without its food culture. Alongside a vast variety of options for every type of cuisine, a must have while in Agra is the indigenous sweet known as Agra Petha. The sweet is a delicious dessert made of ash gourd and sugar plays a sweet conclusion to all the rich experiences in Agra. Besides the native flavour,  you get to taste the Petha in a multitude of flavours - Rose, Chocolate, Paan and Kesariya were my literal favorites from Panchhi Petha, Agra.

How do you get a visa for Cuba

How cold does it get in Texas