Superconductivity will herald the age of electric flight

As air travel comes under pressure to reduce its environmental impact and prompts us to reconsider our transport choices, scientists are searching for greener ways to power flight.

Despite electric car technology advancing and consumers slowly but surely coming around to the idea of electrically-powered driving, the prospects of electric flight still seem a long way off from assuaging our flygskam—the Swedish term for 'flight shame", report from phys network.

But electric flight will become a reality—it's just a question of when. "The previous consensus is that fully-electric long-haul flight of aircraft the size of an Airbus A350 or Boeing 787 is 20 or 30 years away," says Professor Weijia Yuan of the University of Strathclyde.

"But due to the urgent need to cut carbon emissions, we need some dramatic technologies to enable unconventional solutions to speed this process up. The research we're doing now will pave the way." Professor Yuan leads a 15-strong team in the Department of Electronic and Electrical Engineering which is researching applied superconductivity in energy storage, power transmission cables and electric propulsion for aircraft. 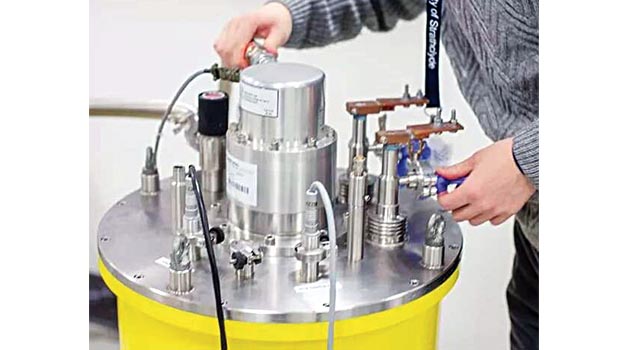 "Superconductivity is a critical technology to enable zero emissions flight," says Professor Yuan. The primary challenge for electric flight is how to make batteries and electric engines small yet powerful enough to allow a plane-load of passengers and their luggage to leave the ground and travel any distance at all before running out of fuel.

"It's currently not feasible to use conventional electrical motors to power a large passenger aircraft, because they're too bulky and lack sufficient power density, but superconductors could hold the key.

"In order to power an airplane the size of an Airbus 320 or Boeing 737 electrical motors would need an energy per unit mass of at least 40kiloWatt per kilogram (kW/kg). At present the most conventional motors on the market could manage is around 5kW/kg." In order to get more power from electric motors you need to increase the amount of electricity that a motor is able to carry.

Superconductors—as the name suggests—are materials that are extremely good at letting electrical currents run through them with little or no resistance. Most people are aware that some materials conduct electricity better than others; a copper wire versus a rubber glove, for example.

The more a material resists the flow of electrical current, the more electrical energy is lost as heat, light or noise. This is the case with existing electrical motors. The more resistance, the less efficient the system. One way of reducing a material's resistance is to cool it. The colder a material gets, the more conductive it becomes until it a reaches a critical temperature where all electrical resistance suddenly disappears and it becomes superconductive—increasing the amount of energy available.

Supercooled copper, for example, chilled to minus 200 degrees centigrade, can carry 1,000 times the current of copper at room temperature. A supercooled, superconductive coil could theoretically hold an electrical charge indefinitely.

However, the necessity to keep superconductors extremely cold to eradicate their electrical resistance presents a challenge.

While some research groups around the world are investigating so-called high temperature superconductivity—anything above minus 200 degree centigrade, or four degrees Kelvin—Professor Yuan's work focuses on low temperature conductors.

At present, the most common way of supercooling a conductor uses liquid nitrogen—the most abundant gas in the atmosphere.

Liquid helium can also be used, but it is a much rarer element, while liquid hydrogen, an extremely explosive element, requires careful handling.

The latter, however, can be used for hydrogen fuel cells and could be the power source of choice for the aviation industry.

Professor Yuan says: "It could be that electrically-propelled airplanes will carry hydrogen to use both as a fuel and as a coolant. But with hydrogen there is a big safety challenge to be addressed.

"Our work is focused on trying to improve the efficiency of electric motors by minimizing the cooling required through novel configurations of the motor's coil, made with rare-earth metals such as yttrium barium copper oxides, and then using advanced analytics tools to guide the design process."

Much of the research is taking place in the recently-opened state-of-the-art Applied Superconductivity Laboratory within the Technology & Innovation Centre (TIC).

He adds: "One of the unique aspects we have at Strathclyde is a strong Electronic and Electrical Engineering department combined with the manufacturing capability at the Advanced Forming Research Centre and facilities like the Power Networks Demonstration Centre. It's a unique combination."

Although fully-electric flight of the kind that will take hundreds of holiday makers to warmer climes might be a couple of decades away yet, Professor Yuan is optimistic for the technology.

"There are still ways to improve jet engines without going fully electric, for example through hybrid propulsion where you use combustion as an energy source but electric motors for propulsion. That would give you an efficiency saving in the region of 10-20%," he says.

"Flight is just one of many applications that could benefit from superconductivity: other includes the energy systems we use in our homes and industry, cables for the transmission of power from offshore windfarms which could facilitate a European a super grid where electricity can be sent over vast distances with little energy loss."

Professor Yuan and Dr. Zhang will focus on cryogenic power electronics and superconducting power distribution. The ultimate goal of the project is to assess the potential of hybrid electric propulsion for reducing the emissions of commercial aviation and eventually to build a technology roadmap for its development.

Having joined Strathclyde in 2018 from the University of Bath where he gained his first position following the completion of his Ph.D. at Cambridge, Professor Yuan is optimistic and keen to take his research to the next level. He says: "I hope to be able to see our research being applied in the next five to 10 years and to successfully set up a spin-out company to commercialize it.

"When you consider the materials we are working with, mostly rare-earth copper oxides, were only discovered in 1986, it will take some more time before we can apply them to everyday functions," says Prof Yuan. "But Strathclyde is UK-leading in this field, both in terms of the research volume and size of the team.