Samsung has confirmed that an internal test was to blame after a slew of users received a strange push notification from the Find My Mobile application. Lengthy threads surfaced across social media, Reddit communities, and support forums overnight as Samsung users were sent a message containing a mystifying single digit: 1. Adding to the mystery, the number would disappear if the person tapped on the notification, report from Newsweek.

It remains unclear how many Galaxy devices were sent the message, but reports suggest the "1" update was pushed to owners across the world. "A notification about 'Find My Mobile 1' occurred on a limited number of Galaxy devices," read an explanation that soon came from a Samsung U.K. Twitter profile.

"This was sent unintentionally during an internal test and there is no effect on your device. We apologize for any inconvenience this may have caused our customers." it added," the tweet continued.

The Find My Mobile application lets users remotely locate lost or misplaced smartphones, back up data stored on the device to the company's cloud service, lock the main screen, block access to Samsung Pay, and—in the worst case scenario—delete all data from the device. 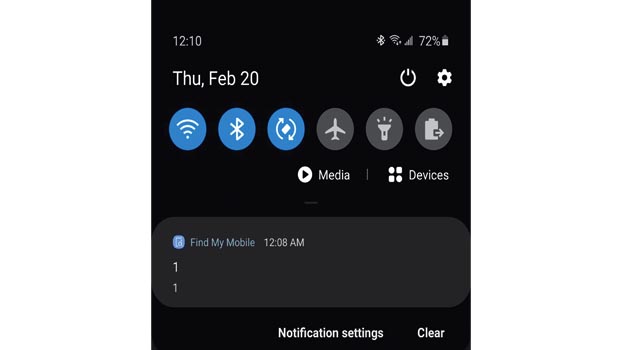 Android Central reported some impacted users claimed they had never registered for the app. Some Galaxy owners who received the alert expressed concern their devices had been hacked, while others were left puzzled as there was little official explanation of what happened. "I got the weirdest notification tonight, it was from Find My Mobile and all it said was '1,'" read a post on the official community forum that generated 38 pages of responses.

"I've never used that app before, didn't even know it was on this phone. I've tried looking it up to see if it's happened to anyone else, but I haven't found anything promising. I'm starting to get worried thinking someone hacked into my phone or something," the post continued.

On Twitter, one impacted user wrote, "Girlfriend and I just had exactly the same Samsung push notification: her Note 10+ and my Galaxy Z Flip each alerted with a Find My Mobile notification. When tapped, it disappeared. Different Samsung accounts on each phone. Theories?"

The user also shared an image of the push notification:

On Reddit, a thread on the subject attracted more than 2,000 comments, with one person writing, "Nice fuel for my paranoia. Silver lining, I guess, is I went through my accounts and tightened up settings." Another person replied, writing, "Oh, my god. Same. I am just getting over major paranoia-related breakdowns and this freaked me out so much."

But it's not the first time a push notification has sparked alarm for smartphone owners. Last year, Chinese company OnePlus confused users after sending garbled texts straight to devices.