Abdul Aziz Jorge became the runner-up in the competition with a score of 4 under par 68 while Korean golfer Kim Hee Soon became the ladies winner scoring 10 under par 62 in the golf tournament. A total of 636 golfers including 584 male, 40 female and 12 junior golfers participated in six categories in the 3-day long tournament.

Quartermaster General of Bangladesh Army Lieutenant General Md Shamsul Haque and Managing Director of the Sikder Group Ron Haque Sikder were present at the opening of the final day. The Quartermaster General distributed prizes among the winners at a function at the Banquet Hall of KGC last night. 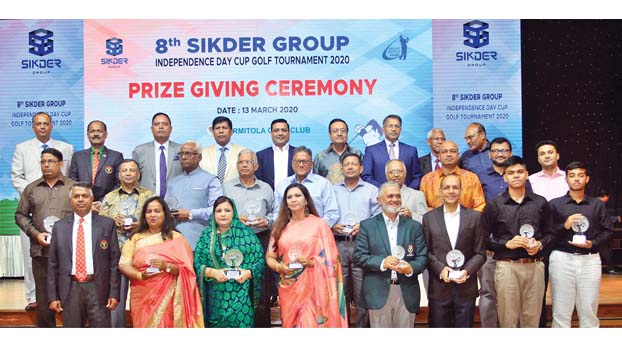 In his welcome speech, Brigadier General Tajul Islam Thakur said, “We are very thankful to Sikder Group for sponsoring this tournament for 8 consecutive times. Sikder Group is one of the biggest business conglomerates in the country.”

He also said, “March is a very significance month to us for three reasons. Firstly, Historic 7th March Speech by all time greatest Bengali Leader Bangabandhu Sheikh Mujibur Rahman, that laid the foundation of our great War of Liberation in 1971.”

“Secondly, 17th March, just only three days left, the birth centenary of Father of the Nation going to be celebrated across the country. Thirdly, 26th March, the Independence Day,” he added. Master Tasnim Karar became the junior winner among 12 participants in ‘Junior 9 Hole’ category of the tournament.

A large numbers of participants, other members of the R&R Aviation Limited and high civil and military officials with their spouses attended the function.

Every year Sikder Group, the leading business group of the country, arranges this prestigious golf tournament on the occasion of the Independence Day.

Sabbir yet to show his true potential