One of the most frequent questions I’ve had in my personal inbox over the last few weeks has been questioning the existence of the fastest Ice Lake processor. Back when Intel announced the Ice Lake family, it consisted of a top 28 W part, several 15 W chips, and a number of 9 W CPUs. To date, all we’ve seen are the 15 W chips, and so I reached out to Intel asking for an update on the situation, report from Anandtech.

Given all of Intel’s trials and tribulations over its 10nm / 10+ manufacturing processes, and promises of hardware in 2017, it wasn’t in 2019 when we saw Ice Lake laptops come to market, offering up to four new Sunny Cove cores with AVX-512 support, and up to 64 EUs of Gen11 graphics. Intel normally splits its CPUs into categories, such as H-series for 35W/45W TDP parts, U-series for 15W and 28W hardware, and Y-series for less than that. 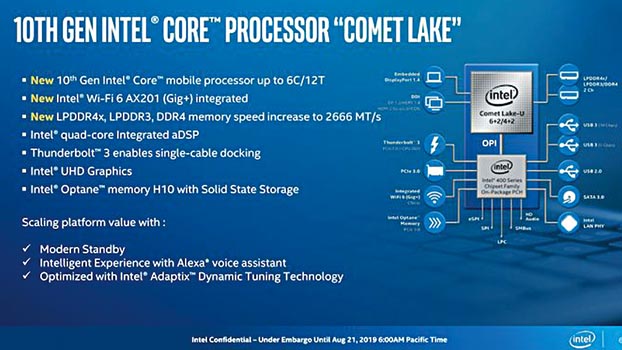 Those names are still used externally, however Intel has stated to us in conversation that they want to move away from that segmentation as a marketing message. While Intel hasn’t announced any 35W/45W hardware, it did announce at the launch of Ice Lake for notebooks that there will be a 28W SKU, several 15W parts, and there would be some around 9W. So far, we’ve only seen devices based on 15W, with the Core i7-1065G7 being very popular for the newest flagship devices.

We tested the Core i7-1065G7 in our Ice Lake Benchmark Preview before the laptops went on sale, and then again with the Microsoft Surface Laptop 3 in December. In both cases we saw strong performance per clock improvements of the new hardware, even if the peak frequencies were not as high which meant that it wasn’t such a big jump over the previous Whiskey Lake Core i7-8565U.

With that in mind, it’s good to note that users always want more performance. In particular, prosumers and commercial users are willing to pay extra for performance, especially as they exist in markets where performance is critical and the additional cost of the hardware can easily be amortized due to being able to get more done.

To that end, there was high expectations for a number of 28 W Core i7-1068G7 laptops to hit the market, with extra base frequency, extra turbo frequency, and just a bit more oomph under the hood. These users want more than just a Core i7-1065G7 pushed to 25 W, and as mentioned, I got a few emails asking where the laptops were, given all the 1065G7 flagship devices that are now in the market.

Intel’s response was fairly blunt in this regard.

This confirms that while the i7-1068G7 was listed in the launch deck for the Ice Lake platform, it actually wasn’t in production in that time. This could be for a variety of reasons, such as the 28 W part needed tuning at the manufacturing level, or there may have been extra work done to provide sufficient performance scaling on the 10/10+ manufacturing process. As we noted in the 1065G7 analysis, it would appear that Intel is struggling to hit higher clock speeds on its 10nm process, compared to its highly tuned 14++(+?) process. 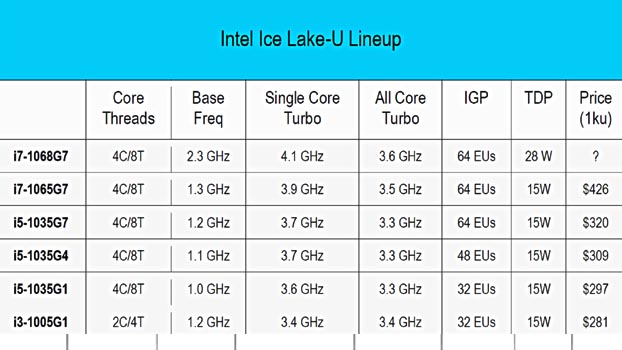 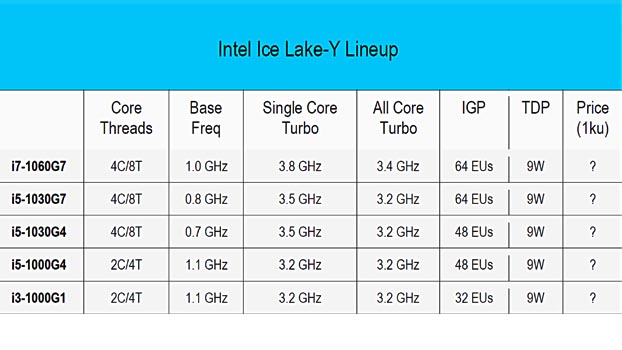 The second half of the quote says that OEMs will have access to the hardware in Q1 2020. This means that devices won’t actually be in the market until Q2 2020. We didn't see any at CES this week, probably due to manufacturers that have already built for the TDP-up 25W mode of the 1065G7 focusing on that perhaps. The 28 W hardware traditionally sits in the middle space between the 15 W thin and light notebooks and the 45 W powerhouses, so we’re likely to see a number of devices using discrete graphics cards too. In a similar light, Intel also gave a comment on the 9 W parts.

‘We expect mobile designs using Ice Lake-Y SKUs to start becoming available in the first half of 2020.’

Again, this is likely to mean that the CPUs have only just got into the hands of the OEMs. With a smaller TDP footprint, these parts might be easier to design for. Comet Lake-U: LPDDR4(X) Support Misses Original Release, Coming In Next Stepping On the memory support of the 15 W CPUs, it was also noted that no OEM had released any Comet Lake CPUs paired with LPDDR4(X) memory. In the release announcement, Intel had stated that Comet Lake as a family supported LPDDR3, DDR4, and, to our surprise, LPDDR4(X) memory. But so far we’ve only seen devices use the first two.

LPDDR3 and DDR4 are actually fairly similar in the memory controller design, allowing a number of IP elements to be reused, however LPDDR4(X) is different enough to warrant some extra time on validation. To that end, Intel confirmed that the reason no LPDDR4-based Comet Lake devices have been launched is that there will be a new stepping of CPUs, labeled K1 (succeeding the initial B0 stepping), that will enable support for LPDDR4.

The new stepping should be available to OEMs soon if not already, for devices to come in early 2020. Unfortunately we didn't see any such devices at CES this week, but because of how OEMs decide to focus on certain products over others, it's hard to say if there's any real significance behind that.

Ultimately, those devices are likely to have a tangible power advantage over the DDR4 or LPDDR3 hardware in the market, so it will be interesting to see what happens once LPDDR4X-backed Comet Lake devices start shipping.